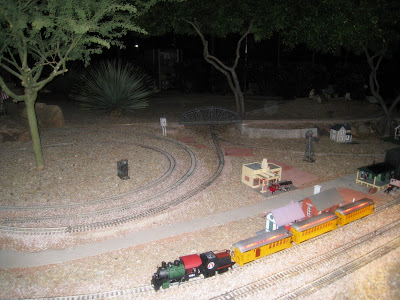 Last night the Sun City Grand model train club had a rare evening train run.   Since there are so many families visiting at Thanksgiving, this was a great family treat.   We went since we're young-at-heart. 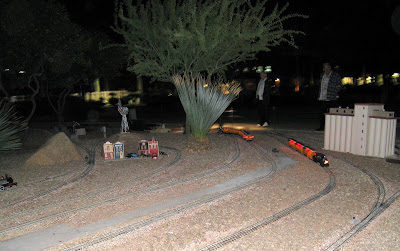 The night was unusually chilly, but that didn't stop the trains.

Posted by Desert Dabbler at 10:48 AM No comments: 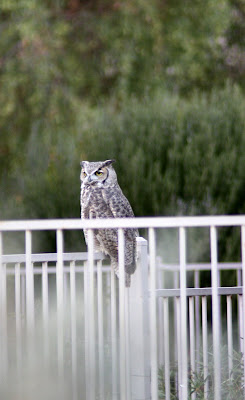 This Great Horned Owl stopped by my neighbor's house on Friday, and Kent was able to get his (her?) picture. My other neighbor was outside working in her yard, but the owl didn't seem to mind at all. He stayed for a long time even though all of us were snapping photos of him. The neighbors whose fence is being used are still in Iowa so they missed him.
A summer or two ago one had landed in a tree behind the house. Because of the way he was acting, we thought he was sick. It was an unusally hot day, and the wind was blowing hard. The owl was perched on a tall stump and had spread his wings out. It looked like he was trying to cool off. He stayed for over an hour, even ignoring a really lucky rabbit that had hopped nearby. Eventually the owl did fly away so perhaps he wasn't sick at all.
During the winter we sometimes hear them call to each other at night. We haven't heard any for a long time so we were hoping we might hear them Friday night. However, we have been sleeping with the window open since Friday, but we haven't heard any owls. Still, it was great to see him and have him visit.
We've seen a lot more wildlife the last two weeks. The cool weather has either made them more active or us. I'm not sure which it is. One spectacular day was last Wednesday. Kent saw a bobcat early in the morning. When I went to see it, however, it was gone. Then about an hour later we both saw two coyotes in the yard. One of them, nicknamed "Bob" by the neighbors, has lost his tail. It didn't seem to slow him down, however. Later than night we were walking. It was already dark, but our area is well-lit. Down by the golf course, FIVE coyotes crossed the street in front of us. They were going from one side of the golf course to the other. It was too dark to tell if Bob was with them or not. We were so surprised--we had never seen eight coyotes in one day.
﻿
Posted by Desert Dabbler at 7:50 PM No comments: