We went to Litchfield Park today to see some great art and hear my favorite musician, Arvel Bird.   The Wigwam Resort is hosting the three day festival.   I saw so many great pieces of art--sculptures, paintings, photography, jewelry and even some clothing.   But the highlight for me was the music and dancing. 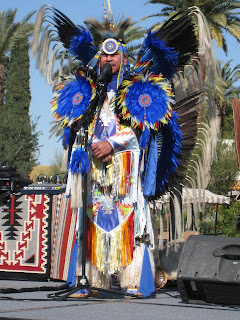 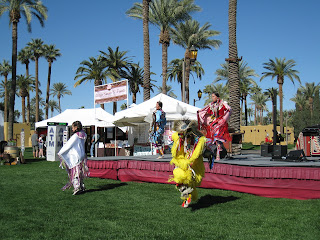 The performance began with a blessing, as is traditional in the Native American culture. This was followed by story-telling and an explanation of the dances.    I didn't write down the names of the dancers because I thought I'd be able to find them on the web.   Unfortunately, I couldn't.   A lesson to me to take my own notes! 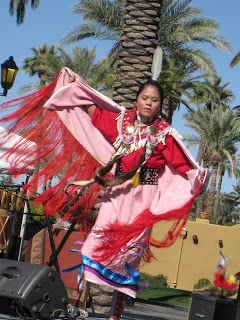 This dancer is doing a Shawl Dance.   The men compete in Fancy Dance, and this is the women's equivalent to that.   Very beautiful and fast-paced. 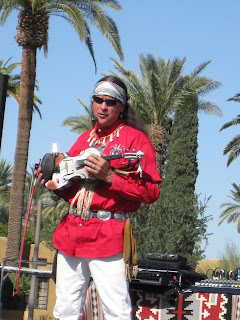 Arvel Bird started with the title song from his album "Ride, Indian, Ride".  I love this album and listen to it a lot on my commute.  After a few songs from this album, he performed "Great Blue Heron" and "Dolphin Dances" from the  "Animal Totems II" album.  I love the stories that he tells about the meaning of the animal totems whenever he performs. 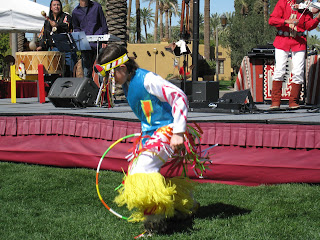 This young man did a great job with his hoops.
The national championships are being held at the Heard Museum this weekend.  I wondered if he would have competed in one of the youth divisions if he had not been performing with his family here.   His father is the drummer, barely visible to the far left. 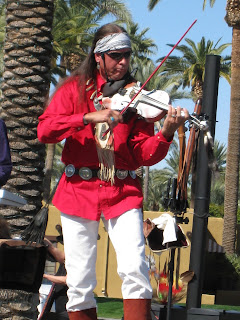 Arvel Bird's latest music features the Celtic side of his heritage.   One of his selections was a tribute to the poorer passengers on the Titanic, many of whom were from Ireland.  The music is excellent, but his Native American songs will always be my favorites.  ﻿


Posted by Desert Dabbler at 9:22 PM No comments: