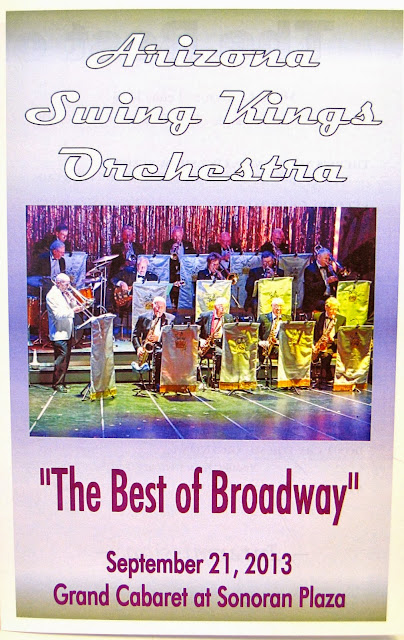 Once again the Grand Cabaret gave us a great evening out.    The Arizona Swing Kings performed to a sold-out crowd last Saturday and got a standing ovation at the end of the evening.
We enjoy all of the Cabaret events, and the Swing Kings are one of our favorites.   Lenny King is the musical director and plays trombone.   This time they were even better because they added two treats to the mix, vocalists and a program.
The Swing Kings usually play swing and jazz.  But this performance featured all Broadway hits, which is why they needed singers.    The five vocalists were great.     The two men, Art Bigornia and Mike Rust, were new to me, and I hope to get to hear them again.   Bigornia first sang "Can't Take My Eyes Off of You", which was very good.  But he nearly brought the house down with "Bring Him Home" from Les Miserables in the second half of the show.    Mike Rust sang "Who Can I Turn To?" and "Almost Like Being in Love", which was my favorite.   I love Brigadoon, and he gave a fantastic performance.
The three women were wonderful, too.   Joni King and Katie Iverson were new to me.  Joni King sang the first song of the night .    The Swing Kings had started off the show with "There's No Business Like Show Business", and Ms. King followed with "Lullaby of Broadway".  What  a great way to set the stage for the evening!   In the second half of the show she did a great job singing "Over the Rainbow".
Katie Iverson has appeared in Grand productions in the past, but I missed them.   She  sang two great songs, "All That Jazz" and "Don't Cry for Me Argentina".  She was in fantastic both times, but especially when she sang the Evita hit.  Ms. Iverson will be appearing on October 25 in Broadway Broads here at Grand.  That show is already sold out.  Lucky us --  Kent and I and our friends, Chris and Lou, already have our tickets.
The third woman, Cheri Seith, performed recently at the smaller Cimarron Cabaret.   On that night she was acting as well as singing, and she sang in character.   It was a good performance, but the character limited her.  With the Swing Kings she sang "Ain't Misbehavin'" and "Broadway Baby" as herself, and she was great.  I'll be watching for her again, too, in the future.
The Swing Kings were, of course, great.   There were five saxophones, four trumpets, including Dan Reed, a Sun City Grand favorite, four trombones, plus drums, bass, piano and guitar.
This is the first time that I remember the Cabaret using a program, but I hope they do it again.   It's great to be able to see the names.   The band directors always introduce the musicians, but it's impossible to remember all the names.   Having a program will help so much!   Plus it's fun to look over the order of the songs and remember them again.
The AZ Swing Kings are performing again at Grand during the Oktoberfest on October 12.  Some Ohio friends will be visiting us that weekend, and I hope we'll be able to introduce them to one of Grand's real treats.              ﻿
Posted by Desert Dabbler at 1:05 PM No comments:

One of the great things about Sun City Grand is that it offers clubs and classes in so many things.    Grand Stitchers, my favorite club, recently offered a class in how to make a Flat Spiral Bracelet.    I used amethyst for my bracelet. 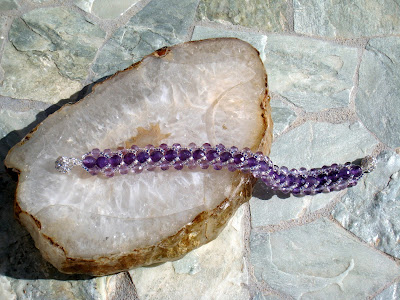 This is a popular class both at Grand and everywhere else.   A quick Google search turned up lots of hits on "how to's" for it.   A beautiful one is Emerald City Flat Spiral Bracelet.   There's even a video on how to make it on Auntie's Beads.

I found the center row of amethyst at a bead show last year.  I've been waiting for the perfect project for it.   Along the edge are smaller amethyst beads and Delica #11 crystals.   I added a silver plated crystal magnetic clasp to it.    Although I sell a lot of my jewelry on Etsy, I'm keeping this one.

One of the interesting things about the Flat Spiral pattern is that you don't have to make it flat.   I used faceted round aventurine to make this one: 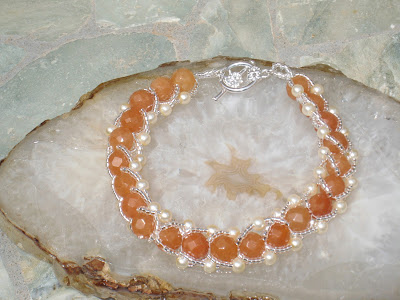 Along the edges I added 4 mm glass pearls.   It's like wearing an orange sherbet.
This one is for sale on my Etsy shop.
The Flat Spiral is so versatile, it can be doubled for another different look.    Auntie's Beads did a video on this version, too.  I can't wait to try it.    ﻿

Posted by Desert Dabbler at 3:11 PM No comments: