Wolves in Yellowstone - A Sad Update It's been a little over 4 years since I went on the Wolf and Elk Fall Adventure in Yellowstone.  That week was a trip of a lifetime, and I wrote a number of posts on my (then) new blog about our trip.   One of the highlights was seeing a member of the Druid pack, a little pup that is barely visible in the photo.   http://www.desertdabbler.com/2009/10/druid-pack-our-first-wolf.html   But despite the fuzziness of the pix, I was thrilled.    We saw a number of wolves, visited an old den, and had a great adventure.
The only even that marred our trip was the re-opening of wolf hunting in Montana.  This happened as we were nearing the end of our trip.   Almost immediately one of the Park wolves was shot, a female who was probably looking for a mate.   She was collared and not far from the Park boundary, but that didn't keep the trigger happy hunter from shooting her.
Those of us who love wolves were appalled, but the hunting lobby won out.    At a distance a wolf looks an awfully lot like an Alaskan Malamute or a husky.   So this hunter could easily have shot someone's pet.   If he saw the collar and still knew it was a wolf, he knew he was shooting a research animal.   Either way, it was a tragedy.  I worried about whether the wolves would survive or be totally killed off yet again.
A year later our friends Pat and Jerry went with the same tour guides on the Spring Wolf Adventure trip.   They were lucky enough to see and photograph even more wolves.   One even crossed the road right in front of them while they were in Lamar Valley.  They snapped a great  picture of him.   I was optimistic that the wolves would survive and continue to thrive in spite of Montana's hunting season.
Sadly, that is not happening.
In a recent article on The Wildlife News blog, wolf expert Kathie Lynch reports that seeing wolves in Yellowstone isn't very easy.   You can read her report at http://www.thewildlifenews.com/2014/01/20/yellowstone-19-years-after-wolf-re-introduction/.
Although there are two very large packs (11 and 18 in each), the other packs are very small.  None of the wolves appear to be hanging out in the Lamar Valley on a regular basis.
The Wildlife News is an excellent source for updates about wolves as well as the history of their reintroduction.
In many states the killing of wolves is on the increase again.  U.S. District Judge for Idaho Edward J. Lodge has ruled that two wolf packs can be eradicated - totally killed - in Idaho’s Frank Church-River of No Return Wilderness.   The Idaho Department of Fish & Game has hired a hunter to kill the wolves, and he has already killed nine.  Ralph  Maughan, Defenders of Wildlife, and other wildlife groups tried to get a temporary Order to stop the killing, but the judge denied their request.  The case is Maughan v. Vilsack in the U.S. District Court in Idaho, Case No. 4:14-CV-0007-EJL.
Years ago I wrote letters to help in the movement to reintroduce wolves back into Yellowstone and some of the western state.   I joined the Sierra Club and other wildlife organizations, too.  When wolves finally returned in the 70's, I was over joyed.
Throughout the years I have maintained my membership in the Sierra Club and also joined Defenders of Wildlife.     I would urge you to do the same if you can.  They are leaders in the fight to save the wildlife and its habitat.
You can also link to Ralph Maughan's blog, which is listed at the side.
And finally, it appears that it may be time to get back to basics.   I've traded my pen and pencil in for a computer screen and printer these days, but letters to politicians are still effective.  If they know people who vote are watching, it does make a difference.
But whatever you chose to do, I hope you'll join me in trying to save the wolves.


Posted by Desert Dabbler at 4:55 PM No comments: 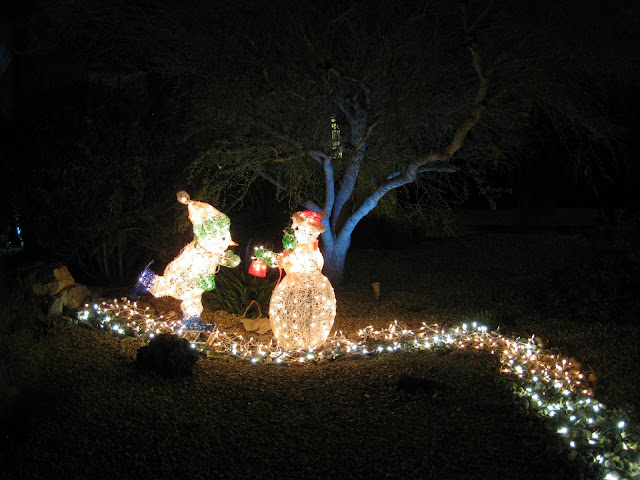 December flew by for me.    Suddenly its 2014!    Cheers, everyone!
A few weeks ago, right before we left for our Christmas in Ohio trip, our neighbor gave us these cute skaters.   Since we've been living in Arizona, our yard has been empty of Christmas decorations because we always leave town.   We hang a wreath on the door, but nada else.
Our neighbor's yard, on the other hand, is decorated with lots of bright lights and cute Christmas scenes.   I love looking at her place and all the other homes that are decorated so nicely.
So I was surprised when this neighbor came over and told me she didn't have room for these two skaters.  She wanted us to have them.   I told her we were leaving soon and might not keep them on, but she said that was okay.   She just wanted to share the fun.   Otherwise, she said, she was going to have to toss them away.
I'm not convinced she would actually throw them away.  More likely she was giving us a really nice hint about showing a little seasonal spirit -- so we did.
Kent placed the skaters on the river rock and set a timer so they would come on while we were gone.    When we returned he added the twinkling lights to accent the "icy" river.    (Glad that ice is as fake as the river!)
Now we look festive and fun.   A great way to start the new year.
Thanks, Neighbor!
Posted by Desert Dabbler at 7:43 AM No comments: