A few days ago we went to the Wildlife World Zoo to see the baby leopard and "Winter", the baby white tiger.   They're so cute!

After walking around to see all the animals,  and back for a second look at the babies, we stopped in at Dillon's.  They used to be located here at Sun City Grand, but they moved.   I really miss their ribs.

The day was a little chilly, and we were the only ones eating on the patio.    But they blocked the wind and provided heaters.   I was quite comfy, especially since I was able to watch the flamingos while we ate.    I usually don't spend much time observing them, and I had forgotten how tall they are.   And noisy!!!!     They put on quite a show.

I'm going to add them to the list of wildlife we need here in Grand.   Right after we get swans, we need flamingos.
Posted by Desert Dabbler at 5:02 PM No comments:

For a couple of weeks every February, Tucson becomes the gem, bead and mineral capital of the world.   I've heard about it for years, and this year I was lucky enough to visit.
As we drove into Tucson on I-10, we began to see white tents, huge signs, even tethered hot air balloons, in parking lots that lined the interstate.  All of them advertising their bead and gem show.    The Tucson show is really a lot of different "shows" located in hotels, warehouses, community centers, and sports arenas.   Nearly anywhere you can pitch a tent and set up a food court can become part of the show.   One directory listed 43 different shows.
The Kino Community Center and the Kino Sports Complex across the street were two of my favorite locations.   Inside the Center were rows and rows of vendors. 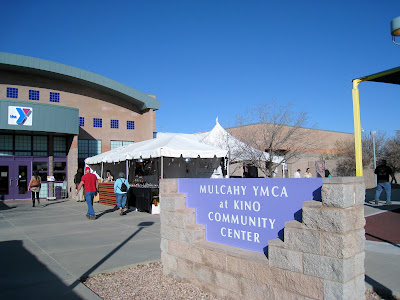 We started our adventure at the Doubletree Reid Park Hotel where "To Bead True Blue" had its main location.  They were also at the Windmill Inn.   The beautiful graphics on their website had captivated me back in November, and I had promptly pre-registered.

The "To Bead True Blue" website said they had over 500 booths, galleries, and displays.  I didn't count them, but I believe it.   They were everywhere!   Inside the hotel lobby and ballrooms, of course, but also outside in the Sunrise Tent, the Sunset Tent, and the Grand Pavilion.

My first stop was at the Christi Friesen booth.  I've been wanting to try polymer clay, and she had some very affordable kits.  She makes the cutest woodland animals, too.   I bought one of her books and a small kit.    I missed getting to meet her or take one of her classes, but there's always next year.

I found other treasures at lots of booths here--Green Girl Studio, The Beading Place, Cherry Tree Beads, Clay River Designs, and more.   By the end of the afternoon I was exhausted and had spent more than half of the money I had budgeted to spend. 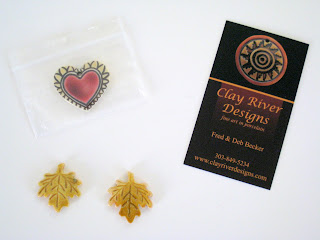 Ceramics were lovely at Clay River.

In addition to the maple leaves from Clay River, I found silver beads from Nepal and art from Lumina Inspirations.   I made them into earrings. 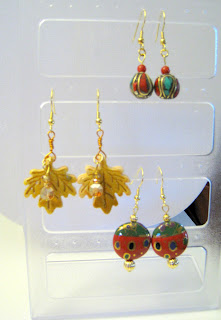 The next day we went to the Holiday Inn for breakfast,  They also had a huge show located in their Holidome.  Unfortunately they were only open to business people.   Desert Dabbler didn't qualify this year, but watch out next year.    My documents are already submitted; they just didn't arrive in time for our trip.
Since we couldn't get into any of the booths here we drove to the Best Bead Show at the Kino Community Center.   I don't know if it really is the "best", but it was great.
We watched the vendors set up outside until they opened the doors.   Again there were rows and rows of booths.   I found more goodies here, including the beads from Nepal and some beautiful award winning ceramics from Golem Design Studio in Bulgaria.   I found out later that they are also located in the U.S. near Tonopah, which is close to Surprise.   At least closer than Bulgaria.
Here is a picture of Vladislav Ivanov with his blue ribbon from a Bead and Button competition. 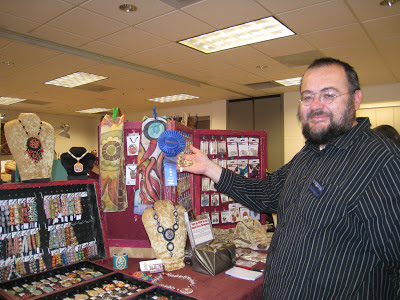 He and his wife are the artists.   He had a beautiful selection of beads and pendants, and I was having a hard time deciding which one to buy.   When he told me about winning the competition, I knew I had found my treasure.
After we made the rounds here, we went to the Kino Sports Complex for the show there.   They also had large tents, but even more interesting were the RV's with outside displays.   We met a lot of nice artists here and saw great stones.    Many of them were still in the raw stage for people who cut and polish their own. 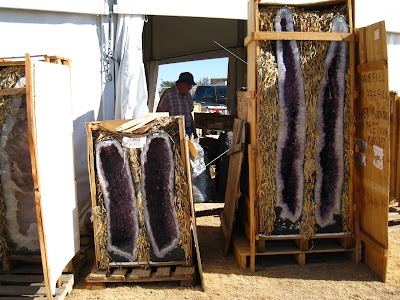 The most unusual, as well as the biggest, were the huge geodes. 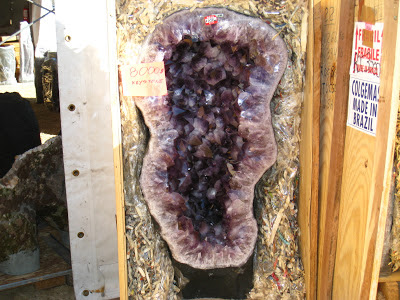 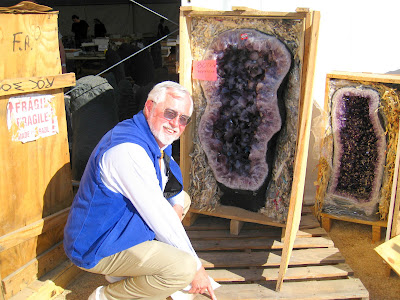 It was huge, though one of the smaller ones that were outside. 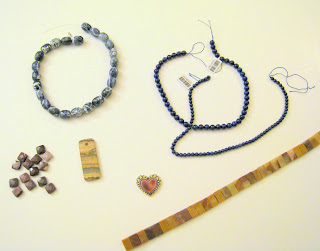 I had to limit myself to the small stuff.   But since this is only a fraction of my treasure trove, I came home very happy and satisfied with my finds.     It will probably take quite a while to turn it all into jewelry.   But I intend to finish within the year--just in time for Tucson 2014.

Posted by Desert Dabbler at 10:37 AM No comments: 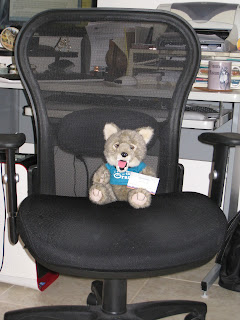 I am now officially inactive.   Since I spend most days being sedentary, the change may not be visible.   But a change it is.   As of February 1, I became an “inactive” lawyer in Arizona*.


I became an attorney on Friday, November 6, 1981, when I was sworn in, along with three of my best law school buddies, by the Chief Justice of the Ohio Supreme Court.    The following Monday my friends and I opened up the second all woman law office in Dayton –Bates, Riley, Sorrell & Tell--and waited for clients to show up.


Dayton’s economy wasn’t doing very well at that time, and there was a glut of office space.   We were able to get a really nice corner suite on the seventh floor of the 111 Building at an affordable rent.  It was very close to the courthouse and its free law library, some upscale clothing stores (The Metropolitan, Rikes, Elder-Beermans, and BMT) and some great restaurants.   Everything new female attorneys needed.


We each put in $2000.00 for operating capital to see us through the first six months, by which time we expected to be earning enough to pay the overhead.    The plan worked.  We were fortunate to never have to add any additional family money into the business.  We worked hard and kept the overhead low.   In those days there were no computers to buy.   One of us had an electric typewriter she brought in until we could afford a new one.   Someone else donated office furniture that her husband’s business wasn’t using.   Another partner’s mother volunteered to answer the phone and do a little typing.   Everybody pitched in, got on court appointment lists, and did whatever it took to earn some fees.


I doubt that a new lawyer today could start a practice the way we did.  Most are saddled with huge student loans, and the courts here in Arizona now require all lawyers to file electronically.   A used typewriter and a ordinary phone won’t suffice.   Computers, cell phones, faxes, copiers, Lexis or WestLaw for on-line research have all become necessities.    Simply buying the basics requires a big investment upfront and monthly service contracts.


After the initial excitement and fun, we had to knuckle down and work of course.   Like all lawyers we had good clients and bad; good outcomes and some that weren’t so good.    Gradually my partners went on to do other things.   One went into law enforcement.   Another became a judge.   I left private practice after about eight years and became a ward of the state—first working as an Assistant Prosecuting Attorney and later as a Deputy Public Defender.     Criminal law is always interesting, sometimes heart-breaking but more often hilarious, regardless of which side you’re on.


So it wasn’t an easy decision to become “inactive”.    But since I’m retired and not working as a lawyer, I couldn’t justify the extra cost just to remain active in name.   I thought of all the beads I could buy with the savings.     Besides, I didn’t delete my legal knowledge; I just gave up the privilege of representing other people.


Today I’m doing some consulting, and I’m dabbling in another venture—making and selling jewelry as “Desert Dabbler”.        Both of which involve more sitting and thinking.    Guess I really am inactive.


*I am still officially active in Ohio because the two states have different reporting times.
Posted by Desert Dabbler at 10:52 AM 2 comments: