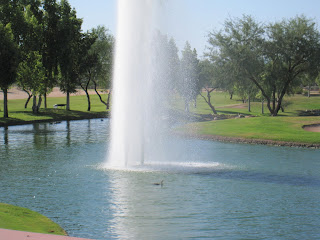 The view from the patio of JB´s Restaurant,
where we bicycled for breakfast this morning. 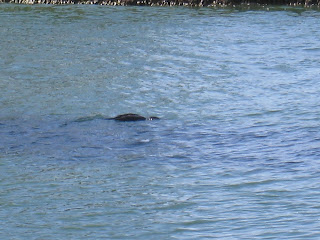 One of the ducks was fishing for his breakfast. 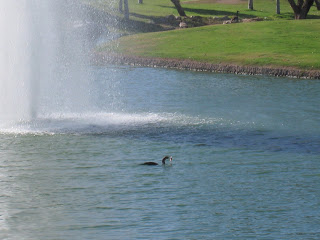 And he quickly caught a big one! 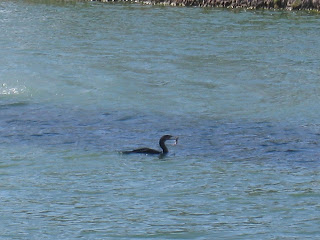 Posted by Desert Dabbler at 10:58 AM No comments: 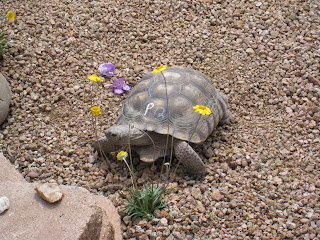 Spock has returned! After his fine adventure, he was returned by one of my friend´s neighbors. He seems fit and happy, and now he has 2 roommates. This latter situation is only temporary, but at the moment Spock seems to be enjoying his new friends.
Posted by Desert Dabbler at 3:20 PM No comments:

Spock is still missing. He was seen by a few of my friend´s neighbors, which is a good sign. We went again tonight to look around the path he has apparently been taking, but we didn´t find him.

To my surprise, we found a different Desert Tortoise. At first I thought it was Spock, but when I got close to him I realized he was much smaller. He was obviously injured, too. His shell is not smooth and pretty like Spock´s, and there was a piece missing. Looked suspiciously like a coyote bite to me, and I love coyotes.

Even more amazing, someone brought my friend her missing tortoise, only it wasn´t Spock. This was an entirely different tortoise that was found walking on the golf course, very close to the street.

I never would have thought Sun City Grand would have three tortoises wandering around. Of course the real number may be much higher. The good news is that we didn´t see any signs that Spock had been hurt. So we will have to keep looking.
Posted by Desert Dabbler at 9:16 PM No comments:

My friend adopted a Desert Tortoise earlier this Spring.  A teenage male that she named Spock.   This is his picture on the day she brought him home.

A lot of care and thought had gone into his adoption.  She had attended classes, submitted plans of his enclosure, and did other things that are required in order to get approved to  adopt this threatened species.   All summer she has diligently cared for him -- planted a variety of his favorite plants and hand-selected the best Yellow Bell blossoms, strawberry tops, and apple slices for him.

But yesterday morning, the little guy went missing.  He was there the night before, but was gone when she went out at 6 AM.    So far we don´t know if he managed to escape his enclosure or whether he was taken.    Desert Tortoises fall victim to predators, such as coyotes, but he seemed too large for a coyote to carry off.   It seems unlikely that someone would steal him, but that is a possibility.

So in the morning we are going to walk around her neighborhood and look for him.  For any of you who have had a pet, you know how they become part of your family.   She misses him terribly, and is worried about his safety.   ´

All we can do is look for him, and hope for a happy ending. 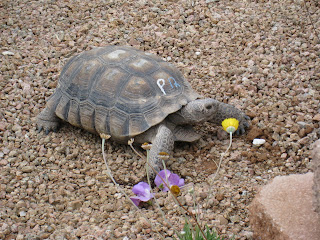 Posted by Desert Dabbler at 10:06 PM No comments:

It´s raining!  Now that may not seem like a reason to celebrate most places, but here in the desert it is.  We have only had about 6 rains this summer, counting this little shower.   Even for the desert, we are dry.
We had been at the pool for a couple of hours, floating around, unwinding with all of the other retired and semi-retired.  (I fit into the latter category, and my husband is in the first.)  While we cooled off,   we cloud-watched and speculated about whether or not there was going to be any rain in the cumulous that were building.   Most of the time the clouds move off or break up without dropping any of the precious water here.
But not today.   For a few, brief minutes (it is over already), it rained.   Enough to wet the sidewalk--and the interior of my husband´s car before the windows got rolled up.   Maybe there was enough to give the cactus a drink of water.
There may be a rainbow, too.  We have some spectacular ones, and I´m going to go look.

Posted by Desert Dabbler at 6:01 PM No comments:

September 12, 2009 - I´ve been thinking about blogging for some time now, and finally decided to give it a try. The layout isn´t what I had hoped for, but it is a beginning.

We´re all looking forward to the end of summer here in the desert. There have been brief periods of cooler (a relative term here) weather. This morning Kent and I bicycled to breakfast--the first time we have done that in months.

And last night we sat on the back porch for a while and watched the lightening. It never rained here, but there may have been some rain in the east. Or maybe not. That´s the way it is in the desert.

While we were watching the sky, a Great Horned Owl swooped down and landed on top of our street light. Kent saw him land. But once he was on top of the light, all we could see was a shadow, and we couldn´t see that very well. The light from the pole blinded our view. After a while, we heard another owl hooting in the distance. Soon our visitor answered!
Posted by Desert Dabbler at 5:09 PM No comments: