The Unofficial Last Weekend of Summer


Labor Day weekend always meant the last weekend of summer when I was a kid in Ohio.   School always started on Tuesday after Labor Day Monday.     All the schools started at the same time back then, too.   The trees wouldn't start turning red and gold until after the first frost, which might not be until late October.   Still, as soon as school started, summer was over.
Here in the desert, summer isn't much of a treat.   Actually it's a time to leave, if you can.
The heat rises from mid-June until August.  Most days are well over 100F.  The really bad ones are over 115F.  You try to do all your outside work (as little as possible) early in the morning.   Same with running errands.   Then it's inside for the rest of the day.   I've made a lot of jewelry this summer in my air conditioned casita.
Occasionally we'll get a cool day or two where the temperature drops below 100F.  Whenever there's a little rain, like today, we get excited and frequently walk around in it.  It's very scattered, however, so not everyone will get a shower.   This morning the rain was light and gentle. 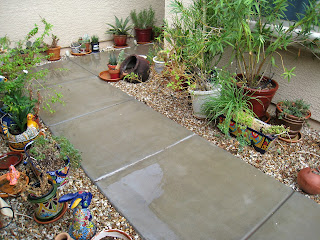 The huge monsoon rains start anytime after July.   I always hate driving in the summer here because you never knew when a storm might pop up.
A monsoon storm is totally different from any rain I had seen in Ohio.  A monsoon rain comes down so fast and hard you can't see the road, or even the car, ahead of you.  The roads flood and washes fill with water. The wind howls, kicking up dust, tumble weeds, and who knows what else.   Dust storms are huge walls of dust that completely obscure the road.  They are terrifying.
These storms were a real problem when I was working in La Paz County and had a 2 1/2 hour commute each way.  It's very rural there and not much weather forecasting seems to go on.    More than a few times I left Parker when there were sunny skies and no hint of trouble ahead.  But the farther I drove toward home, the darker the sky would get.  I knew I was in for trouble.
One of the greatest things about being retired is not having to worry about driving home in a monsoon.   When you're in the city, you can always pull into a lot and park.   But in the country, there's no place to pull off.   The roads are narrow and the shoulder is frequently non-existent.    When the road gets flooded, it's very dangerous.   The water is muddy so you can't see how deep it really is, and it is amazingly swift and strong.   I don't think there have been any deaths this year, but there were last year when a few drivers tried to cross the washes.   I'm very grateful to be spending this monsoon season safely inside. 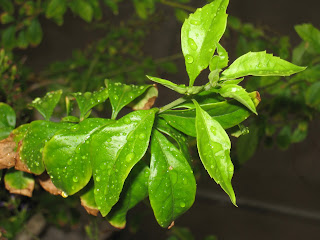 Right now raindrops are on the leaves and the temperature is 83F .   Even though it will get hot later today, I'm going to enjoy this little break.  Summer isn't over here, but it's on its way out.  ﻿
Posted by Desert Dabbler at 9:54 AM No comments:

There's only one road that goes into Denali National Park.  It's about 90 miles long, and regular cars can only go on the first 15 miles.  After that traffic is limited to Park buses and a few local residents' vehicles.
The road is partially paved.   It's bumpy and dusty in the summer and snowed closed in the winter.  Some parts are single lane.   In a few spots, like at Polychrome Pass, it twists and turns and offers more thrills than an amusement park ride.   Bears, moose, and caribou graze within a few feet of it.   Some animals walk right down the middle of it.    Just riding the bus is a great adventure.
But there is more at the end of the road--four backcountry lodges--hidden away in the vast wilderness of Denali.   We were lucky enough to stay one night in the Denali Backcountry Lodge, although I wanted to stay there longer.   They were booked up so one night was all I could get.   This sign marks the turnoff. 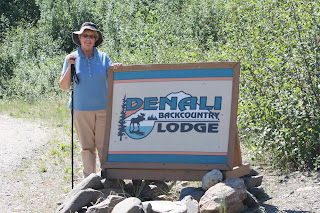 The area is huge and very secluded.  One other lodge was visible from the road as we drove down a long hill toward our destination.  Later we looked up the mountainside from Moose Creek that ran past our lodge and saw the back of that lodge.   But the other two lodges were totally hidden from view.  I think one of them belongs to the Princess Cruise line, but I'm not positive.   If it's inside the Park, it has to be near here. 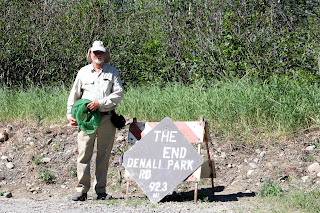 Here's the sign that marks the end of the road.   The air strip is a few feet past here.   Some people took flight seeing trips from here or flew back to avoid the long bus ride back.
We went on a botany walk with one of the naturalists.  It may not be visible in the picture, but we were wearing mosquito netting and a ton of Dreet.   Fortunately this was the only place that the mosquitoes were really bad.
Not too far from the turnoff is this cabin.  A pioneer woman, Fanny Quigley, lived here for many years.  She was known for her pies and provided food for the miners and others.   The cabin was used by a few other people after her death, but now it has been restored as a landmark.   Every nail, board, table, etc., had to be hauled in from the outside!   She gardened and cooked, but it had to be a lonely way of life. 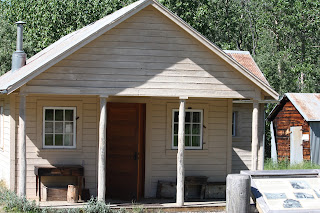 This area, Kantishna, was brought into the Park in 1980.  The private lands are "in holdings".  The Lodges remain, but the mining operations have ceased.   From this location the Park continues west to the sea, but there are no roads in that area.
I loved the Denali Backcountry Lodge!   It's beautiful, spacious, and just rustic enough.   The main building is two story, with the main dining room downstairs and a library, fireplace, and small gift shop upstairs.  There was a wine and cheese party before dinner, and we enjoyed our  wine on the deck off of the library.  ﻿ 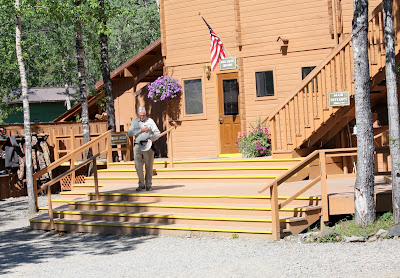 There are rows of "cabins" and a separate building where they serve lunch.   After dinner one of the naturalists gave a talk on owls in there, too.   Very interesting.   You can see that building in the picture below.   Even the swinging bridge was fun.   On the other side of Moose Creek was an old miner's tent, a maze, and a few other spots for reading and relaxing. 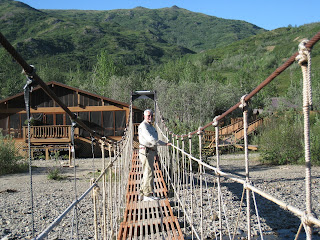 A view of the buildings from the other side of the creek. 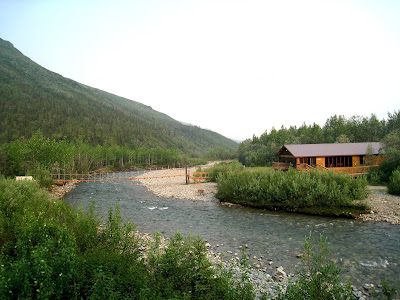 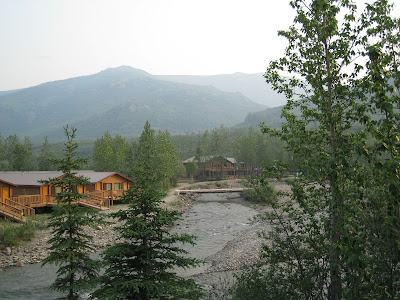 The Lodge was even better than I had imagined.   Lunch was very good and very informal.   Lots of options for sandwiches, soup and salad.   Many of the people were only there for a short time.   They had to return to town when the afternoon bus left.
Dinner, however, was gourmet quality.   It was only served to the overnight guests.   We were seated at tables for 6 so you had a chance to talk with other people.    Two of our table mates were from Australia, and the other two were from Washington state.
If you ever get the chance to go, do it!


Posted by Desert Dabbler at 10:55 AM No comments: