We went for a bike ride around Grand again today.   We've been doing this on Sunday afternoons lately.  It's a great way to exercise without feeling like you're punishing yourself.
I hate to do traditional exercise.  I hate the smell, the noise, and the atmosphere of a regular gym.   Even here, where the "gyms" are really health clubs, I have trouble making myself work out on machines.    But riding a bike is fun. 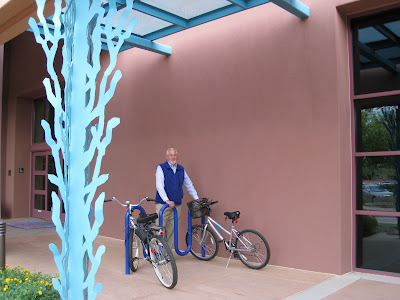 We park our bikes in front of the Sonoran Plaza.

Inside are classrooms where the Adult Education groups meet.   They have classes on every topic imaginable:  history, art, wine tasting, writing, language,  and much, much more.   I can't wait to retire so I can go back to school.
The Scrapbook Club meets in here, too.   Another one of my hobbies.    There's also a small sandwich shop, Birt's Cafe, which specializes in healthy foods that taste great.  It also supports some important social services, too. 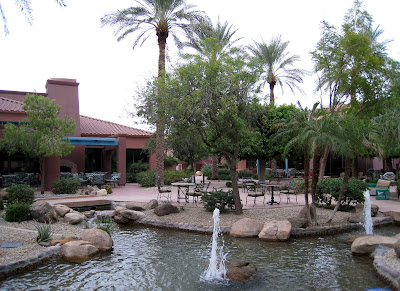 The Sonoran Plaza
We usually get a cup of coffee or a Coke and relax by the water feature for a few minutes.  It's always relaxing, and frequently something unusual is happening.   Last week some women were doing a scavenger hunt.   They needed to bring back a picture of 12 or 13 people, so they rounded up a group of us and snapped their photo.        ﻿ 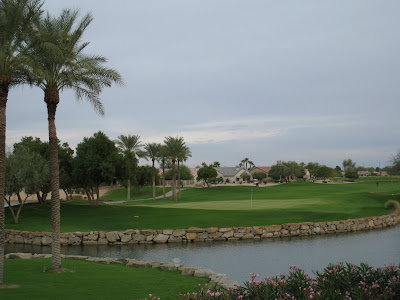 The View from Dillon's Patio
We rode over to Dillon's and walked around to the back patio area. The restaurant has been closed for repairs and remodeling.   Recently it was announced that the Board of Directors is going to try to find a different restaurant to run it when it re-opens.   The drawings of the new look are impressive.   They are doubling the size of the bar and adding some booths.
The back patio area overlooks a large pond and one of the golf courses.   It's great to watch the egrets and herons fish the pond.   Bunnies are usually hopping all around, too.    I've missed going there since it has been closed, not because of the food (although it was good), but because I miss watching the wildlife.   If the sun is at just the right angle, you can even see the fish swimming around.   Some of them are huge!
I can't wait until a new restaurant goes in so I can watch the birds and bunnies again.﻿

Posted by Desert Dabbler at 3:08 PM No comments: 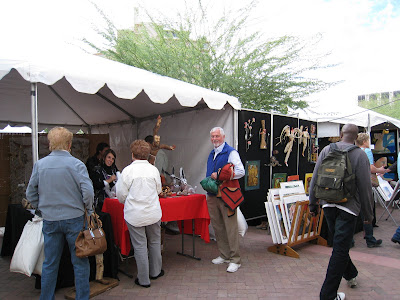 My favorite guy holds my treasures while I take the picture.

Posted by Desert Dabbler at 6:50 AM No comments: 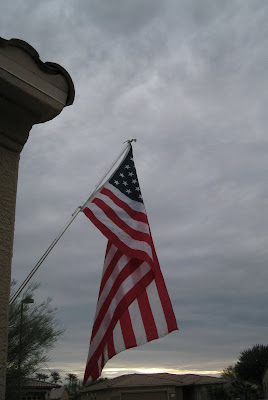 On this Veteran's Day I am grateful to our veterans and to a VA program called Aid and Attendance.
Aid and Attendance is a benefit for veterans or their widows who reside in assisted living or nursing homes.  The primary requirements are that the veteran must have served at least one day in a war zone and the veteran or widow must now need assistance in an assisted living or nursing home facility.     The program is not well known. The best source for information can be found at Veteran Aid.
Both my father and father-in-law were veterans of World War II.  I first learned about the program when my father-in-law needed to be in an assisted living facility.    The program helped him afford the special care that he needed during the last year of his life.
My father died many years ago, and my mother now resides in assisted living.   As his widow, she was eligible for the program.   No one at the facility mentioned this program as a resource to help pay for her care.   But because I knew about Aid & Attendance through my father-in-law, I was able to help my mother apply.   The program pays a monthly benefit amount, which helps so much in affording the high cost of an assisted living facility.
My father would be very pleased to know that his service during World War II is now helping my mother.
So on this Veteran's Day I salute not only our veterans, but also the VA and the congressional representatives who vote to fund and support these important programs.
﻿
Posted by Desert Dabbler at 9:29 AM No comments:

I'm coming out of a work-induced hibernation, and there's no better way to do that than to enjoy a day in the sun, listening to great music.
The Litchfield Park Festival featured Arvel Bird, my favorite Native American musician, and my favorite Native American group, Estun-Bah.    The downtown area was closed off and lined with booths of art, jewelry, and food.    All afternoon the musicians performed on the stage in the center of the festival.﻿ 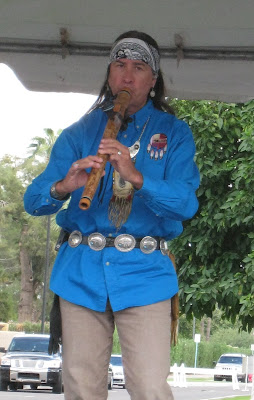 Arvel Bird played a lot of my favorites from his "Animal Totems" CDs , including Red Tail Hawk.   The first time I heard him perform was at a different festival in Litchfield.  As he performed Red Tail Hawk, a real red tail hawk circled in a thermal above the stage area.   A magical moment.
He has won many American and Canadian awards, including being named Artist of the Year in 2007 by the Native American Music Awards.   Today he performed songs from many of his albums, including some of his newer Celtic songs.   I bought his latest CD, "Ride Indian Ride", which is listed as Blues Rock.  He played the title song, and it sounded great.  I can't wait to listen to the entire album. 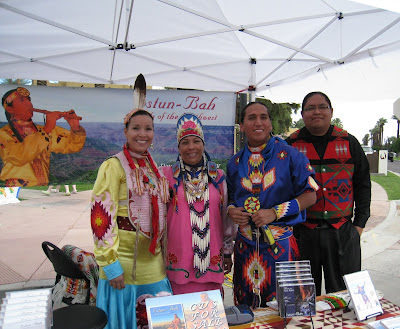 Estun-Bah features Tony Duncan on flute (in blue above), Darrin Yazzie on guitar (in red and black), and Jeremy Dancing Bull on drums (see photo below).    In addition to being a great musician, Tony Duncan is the World Champion Hoop Dancer.   He performed a hoop dance today, but I couldn't get a good picture.  But you can see a picture of him at the Hoop Dance Competition that was held at the Heard Museum this year on my February 6, 2011 blog.
On the end in yellow is Tony's wife, Violet.    She performed a Shawl Dance, one of the women's social dances.   Very graceful and colorful.    The lady in pink must be family, too, but I'm afraid I didn't get her name.   Their baby also made a brief appearance--so cute!  He was being held on a traditional cradleboard, but  I  missed getting his photo.  When I took the above pic, he was asleep.
I bought their CD "From Where the Sun Rises", and I'm listening to it as I write tonight.   Beautiful songs.   Their CD's can be found on Canyon Records.  This album was a finalist in the Best Instrumental category, 2011 NAMA. 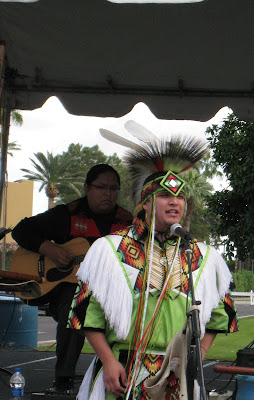 In addition to playing drums, Jeremy Dancing Bull also performed a men's grass dance.   I had never seen this type of dance before.  It comes from the northern plains tribes where tall grasses grow.   In order to prepare the area for the tribe, the young men had to stomp down the prairie grass.    The dance celebrates this tradition.  It is often the first dance performed at a pow-wow or other gathering to bless the dance and dancers.   A very powerful and energetic dance! 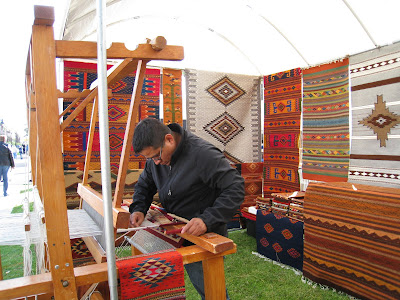 The arts were beautiful, especially these Navajo weavings.
Jewelry, pottery, paintings, and photographs were abundant.   Something to please everyone.  I picked up a few small Christmas gifts--it will be here soon--and wished I could have bought a lot more.
My wish list is always bigger than my checkbook.  If only Kent would win the lottery.....

Posted by Desert Dabbler at 8:04 PM No comments: