A Trip to the Zoo

There's nothing like a trip to the zoo to make you feel like a kid.    Kent and I and our friends, Chris and Lou, spent last Saturday at the Wildlife World Zoo & Aquarium.   Kent and I had visited there a few years ago, but our friends had never been there.    Since that first visit the Zoo has added the aquarium and greatly expanded. 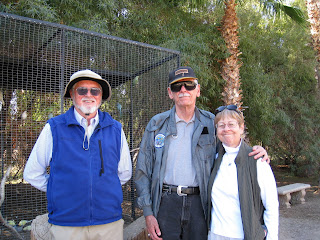 Most of the exhibits are outside since Arizona has such great weather.    Cages, except for the obviously dangerous animals, are kept to a minimum.     The cute Prairie Dogs were the first residents to greet us. 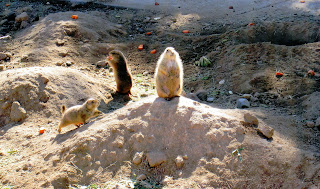 The big guy in the center kept his back to me for a long time.  I know he saw the camera in my hand.   But when someone new walked up, his curiosity got the better of him, and I was able to snap this pix.
The zoo has a number of unique animals that I had never viewed before.   Singing Dogs. African Wild Dogs. Wart Hogs. I didn't get any pictures of them because even though they're different, they didn't appeal to me.    They have a "Dragon" exhibit that we skipped, too.  Too reptilian for me.
My favorite exhibit was the petting zoo.  I went right in with the kids, both kinds.   I love goats and couldn't resist feeding and petting them.  They also had deer and llamas. I WISH Kent could have taken a more flattering picture of me--but this was probably the way I looked the entire time I was inside the petting area. 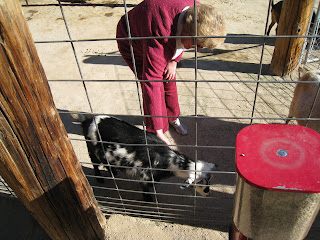 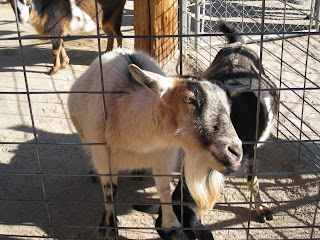 This Zoo is a private one, much smaller than the Phoenix Zoo, but miles closer to where we live.   It has Arizona's only public aquarium, complete with sharks, stingrays you can pet, and penguins.   The penguins were small ones, not the big Emperor variety, but they were very active when we saw them.    I had petted stingrays when they were on temporary exhibit at the Phoenix Zoo a few years ago so I skipped petting them here.
The WWZ has an amazing number of exotic birds.    Parrots, macaws, swans, ducks, a giant condor--every kind of bird you can imagine.    Many of them are free to roam, like the swans and peacocks, while others are located in aviaries.  A huge number of birds are kept near the small primates.    Another set of cages is located near the tiger and lion area.   Black swans are found in the ponds as well as lounging with the kangaroos in the Australian area.   They were all beautiful.  But by the time we reached the African Walkthrough Aviary we all agreed we had seen enough birds for one day. 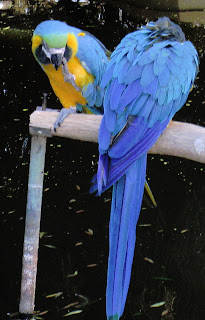 A pair of Blue and Gold Macaws and a different macaw perched over a pond.  Macaws are from South American and mate for life. 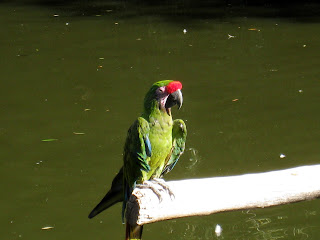 Desert and savanna animals do well here.   This camel was very regal! 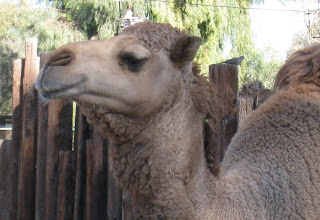 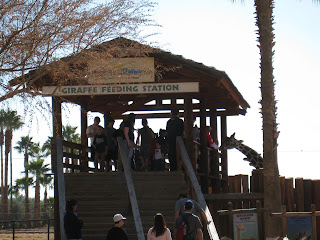 The giraffe feeding station was a hit with the two-legged kids.

The Australia outback must be similar to Arizona because the kangaroos and wallabies seem very happy here.    They are free to roam, but the people are encouraged to stay on the path. 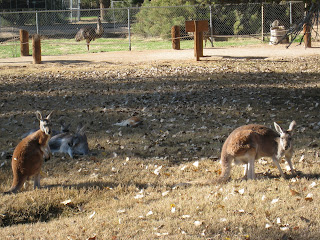 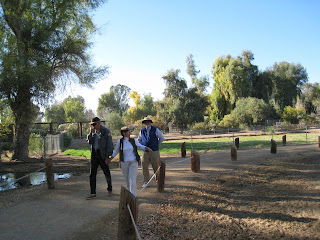 At the end of the day we went home tired, a little dirty, but very happy.   Just like I did as a kid!﻿


Posted by Desert Dabbler at 7:46 AM No comments:

When we left our house in Ohio, we left behind a great spice drawer.   I tried to get one added in our new home, but a spice drawer wasn't on the list of available kitchen options.   Ever since moving in, I've wanted to find one.
I'm not sure why I liked the spice drawer as much as I did.   I'm not a great cook, and right now Kent does all of the cooking.  He's better at it, he likes to cook, and he's retired.
We use a lot of spices, stored in a cabinet near the stove.   They took up two shelves, and the one I wanted was always at the back.   This didn't seem to bother Kent, but I missed my old drawer.
Even if I wasn't cooking, I wanted to have another spice drawer.  I like the look, and it gives me hope that someday the other drawers in the house will get organized, too. 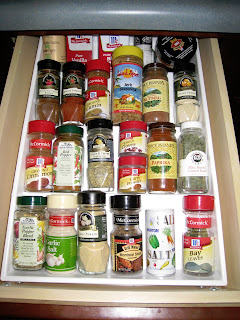 A few days ago I found one on Amazon.   It didn't cost much, especially compared to the first one, which was part of a semi-custom kitchen.   My new drawer is smaller.   Too small to use the expanders, but the main part fits great.   Kent installed it and put the spices in place.
When I looked at them, I was surprised at how they were arranged.   I had alphabetized my old spice drawer, but Kent organized this one by which ones he uses most often.  His favorites in the front row and the least used on the back row.
Since he's the cook in the house, I left the drawer alone.   But it made me wonder whether sorting by use is a man-thing or a cook-thing.
In any event, it's different.   Which always adds a bit a spice.

Posted by Desert Dabbler at 9:08 PM No comments: 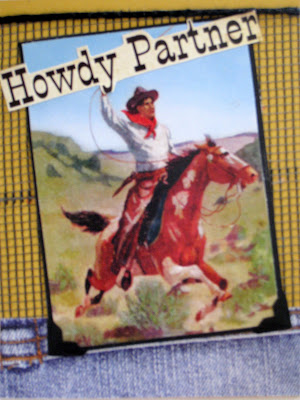 Happy 2012!!!
In my family we had a tradition of eating pork and sauerkraut on New Year's Day.  I'm not sure why, and I hated it as a kid.   It's okay now but I don't keep that tradition.
Instead, I do on New Year's Day the things I hope to do all year.  It's more fun than making a resolution to lose weight, and I have a much better chance of succeeding.  So I've been writing, making cards, walking, viewing wildlife and partying.    All of these activities are too much for one day so I've expanded New Year's Day into New Year's Weekend.   It worked out great this year.
I saw a nice sized coyote when I went to the mailbox on Saturday to mail out the last of the year-end charitable contributions.   He was walking between our house and the neighbors.   We both stopped.  I wished him a Happy New Year, and he returned to the back yard.
From inside the house, Kent and I watched him sniff under bushes and hunt around the mounds of cacti.   He managed to scare up a few quail, but he didn't find any rabbits.   But that didn't discourage him.  He was having such a good time he was wagging his tail!!!   Neither of us remembered seeing a coyote wag its tail before.   It was fun to see him so happy.
Our friends came over later to celebrate Christmas & New Years.  We had left for Ohio before having a chance to celebrate Christmas.   The day was so nice, sunny and in the 70's, that Kent grilled steaks for us.   Much better than sauerkraut!
Today I've been writing and making cards.   The New Year is getting off to a great start.
So if New Year's resolutions depress you more than inspire, think about changing your tradition.   Do at least one thing you hope to do all year.    You may not lose weight, but you'll be happy.
﻿

Posted by Desert Dabbler at 10:34 AM No comments: