From Hail to Rainbows

On Saturday two weeks ago, it nearly reached 100F.  Yesterday it hailed.

In Arizona we've grown used to the laws and the politicians being crazy, but we could count on the weather being great.   Not today! 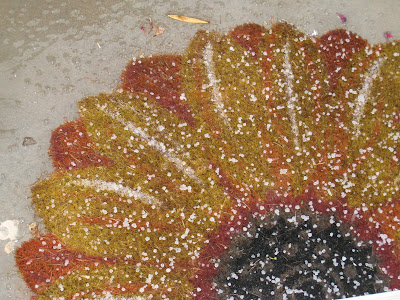 The sunflower mat outside my casita is dotted with hail pellets.
Rain began falling early, sometime during the night.   The community garage sale, which is only held twice a year, was cancelled due to the gloomy forecast.   Good call on that one.
Around noon it stopped raining, but it was so chilly I had to turn the furnace on.   In April.   A day or so ago I heard other people's air conditioners running.
The hail didn't last long.  By 4 o'clock the rain had nearly stopped.   Dark clouds hung heavy in part of the sky, but the sun  began to shine.   I knew to go look outside for an Arizona treat.
The reward for the bad weather day was a double rainbow.  It was spectacular.
Now  if we could only get our politicians to give us some rainbows.....
Posted by Desert Dabbler at 8:08 AM No comments:

Email ThisBlogThis!Share to TwitterShare to FacebookShare to Pinterest
Labels: Hail

A Day in the Life of an Argentine Giant 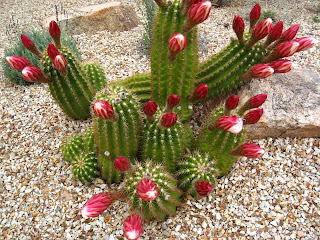 Argentine Giants (Echinopsis candicans)  are cacti that look very dull and ordinary all year.   But when they bloom, they are spectacular.  Often they bloom at night, and by morning they are already looking a bit old.  But yesterday morning I caught them when the blooms were just about ready to open. 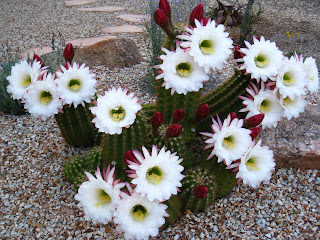 All day we checked on them.   By late afternoon, the blooms had opened.  These flowers are at their prime, only a few hours old.

The flowers are large, about 5 inches across.

Posted by Desert Dabbler at 8:20 PM No comments: