For rock and gem lovers, February means the Tucson Gem Show.    At the beginning of the month, I spent two days there and visited four shows.    The Tucson Gem Show is actually a lot (many, many in fact) of individual shows set up in hotels, convention centers, parks, and pretty much any flat, open space in Tucson.  To help you navigate the event, there are shuttle buses between many of the locations.    The Tucson Show Guide, which you can pick up at many of the shows, lists the location of the shows and how to get there.  Advertisers can buy space to let you know what you can find at their show.

Since this was my third time there I was a bit more prepared and experienced.   I went to a few of my favorites and added a new show.  I ran out of time and energy (not to mention money) before I got to all of the places I wanted to see.

My first stop was at the Doubletree Reid Park Hotel where the To Bead True Blue show is held.   This is always my first stop not only for the great shops there, but also because the hotel has a great patio cantina.   After a little shopping Kent and I always go there for lunch.   From the patio you can watch the A-10s and other military aircraft that fly in and out of a nearby base.    I skipped the Margarita since I had bead business to do, but I hear they are great.

I was first attracted to the To Bead True Blue show because of its beautiful brochure.  At a different hotel they hold a sister show, The Tucson Bead Show, which has an even more beautiful brochure.   I went to that show last year, but decided to skip it this year.   I had found my best beads at To Bead True Blue, and I needed to spend my time wisely.

My best finds at To Bead True Blue came from Dakota Stones, Holy & Pure Gemstones, and Clover Needlecraft.   Lately I’ve been working on bead embroidery projects, and I had bought some great cabochons from Dakota Stones online.  I had hoped to pick up a few more cabs in Tucson, but they didn’t bring any.  However, I found some great stone beads, including Red Tiger Eye.  When I purchased my finds, I received a coupon that I can use later online, where I know I’ll find some great cabs.

Another of my favorite shops is Holy & Pure Gemstones.  They are based in Georgia.   Lapis, apatite, azurite, and onyx were my best finds here.   They also had some great metal beads and chain.   The quality of everything is great. 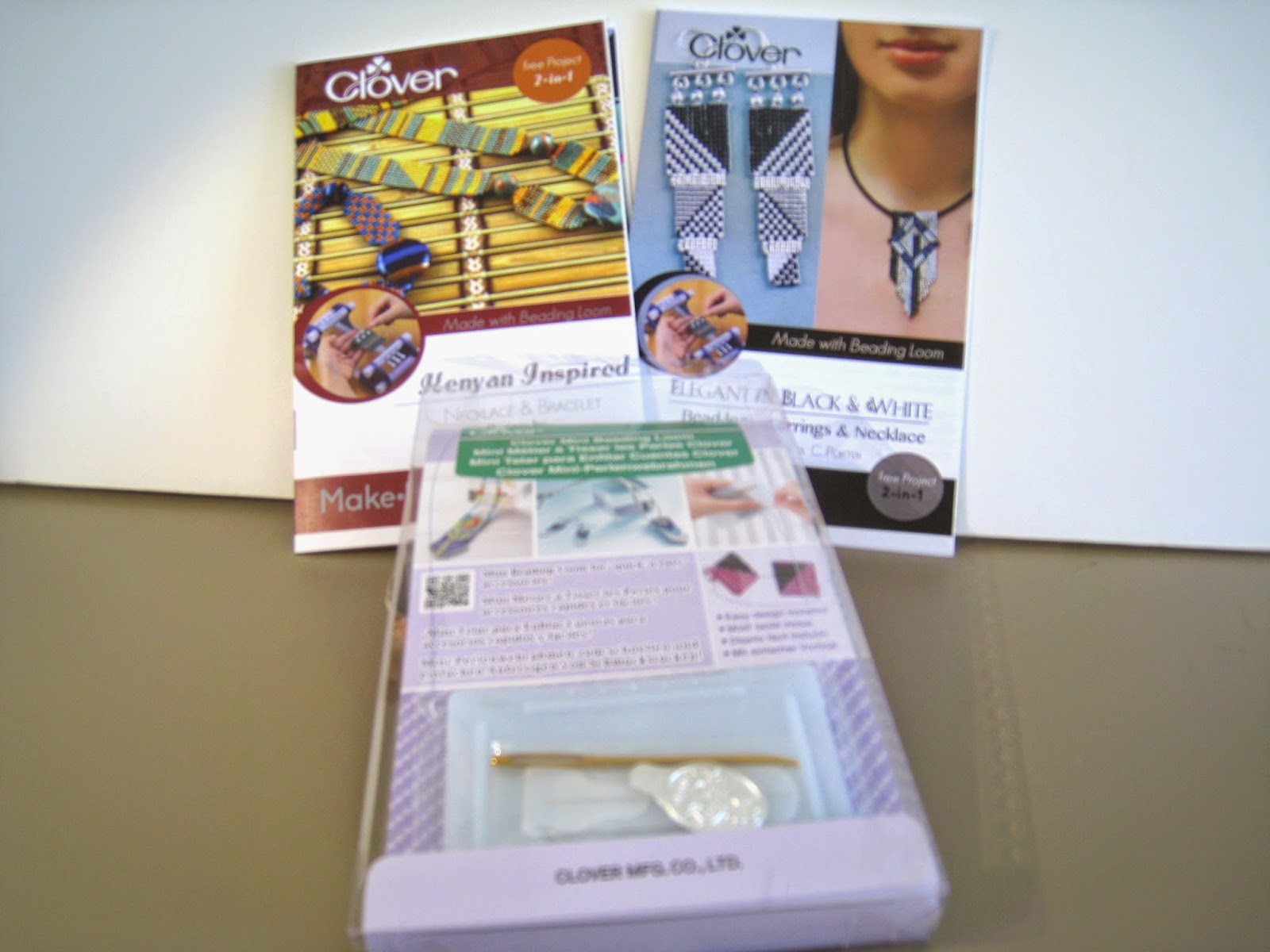 The mini loom in its package.

My most unusual buy was a mini beading loom from Clover.  I’ve been wanting to make some native inspired beaded bracelets and earrings, which I’ve seen done on looms.  I’m excited about learning this new technique.  I bought some seed beads and Tulip needles from Beyond Beadery, which will go with the cabs and the loom.

After a few hours here we went to the Best Bead Show at the Kino Community Center.    My favorite shops there Whimbeads, which has a huge supply of seed beads, and Scottsdale Bead Supply, which has great hand cast bronze.    I’ve never been to their brick and mortar shop in Scottsdale, but I always shop at their booth in Tucson.   Go figure.   But no matter where it comes from, I love their bronze.    I've made earrings as well as necklaces with their bronze pieces. 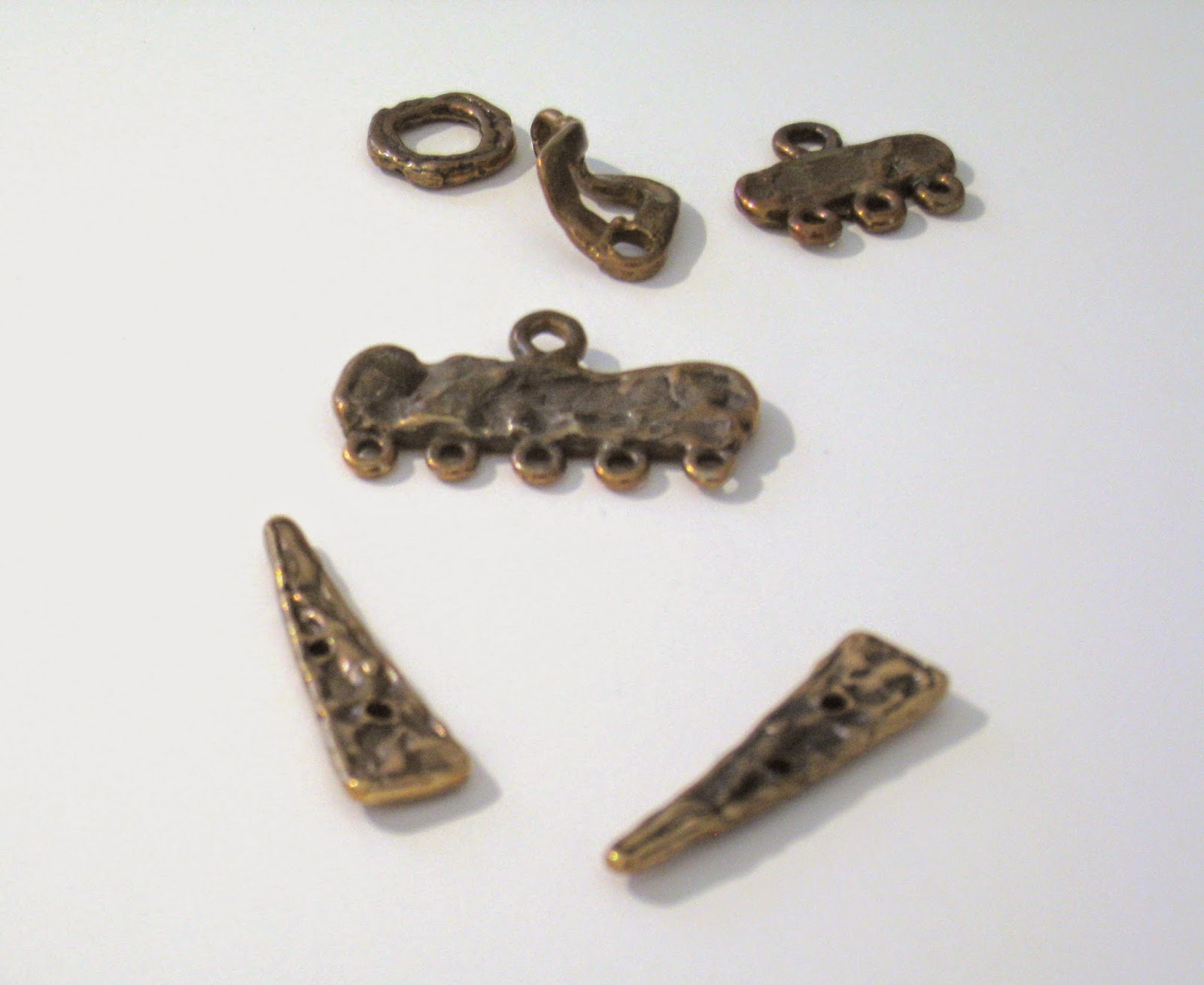 A few of the bronze pieces. 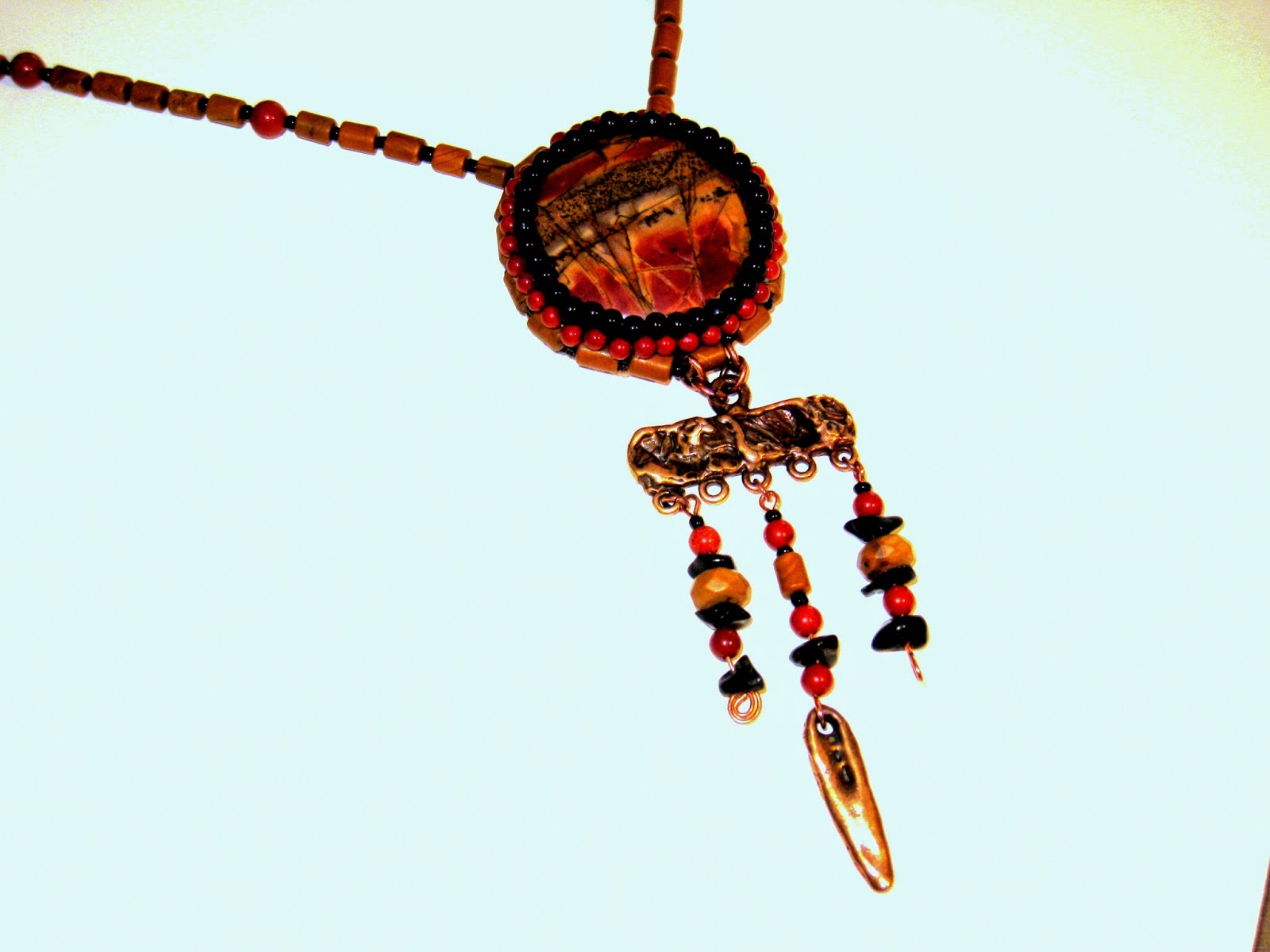 This necklace has two pieces of bronze.  I kept it for myself and wear it often.

The new show for me this year was the J.O.G.S. Tucson Gem & Jewelry Show, located at the Tucson Expo Center.   I went their specifically to see the cabochons from Colorwright, a Tucson online shop that I knew was going to be there.   As soon as I signed in, I went directly to their shop.   It was wonderful!    Colorwright had fantastic cabochons, and the two women who were working that morning were friendly and knowledgeable.   I wanted one of everything!    I restrained myself a little, but I admit I bought enough to keep me busy for months.   The picture doesn't do them justice, but here are a few of my finds: 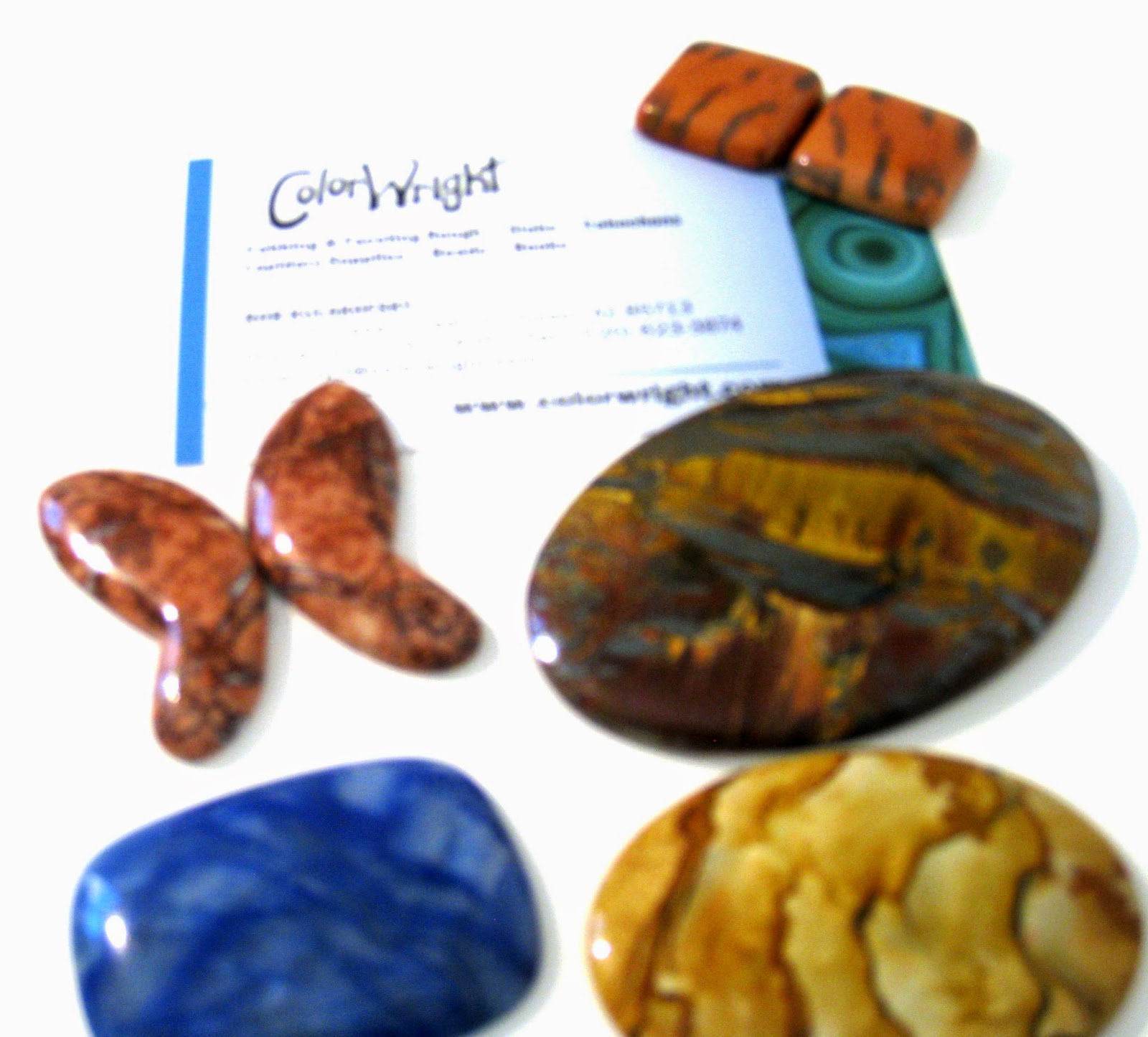 J.O.G.S. is H.U.G.E.   We spent a few hours looking through the other shops, but I only saw a fraction of what was there.   I bought some great turquoise mined in Mexico and Colorado from Cowboy Trading.   I found silver charms and beads from other shops.   We saw a lot of international dealers here. Many of the shops sell high end gems and diamonds, which were wonderful to look at but out of my price range.   They even had a booth selling whomp-um jewelry, which is very unusual and beautiful.   The artist was Cherokee.    I’ll definitely return here next year.

The last show we stopped at was the Miner's Co-op Rock Show on Travel Center Drive.    We found them last year and wanted to go there again.   This show has more real rock hounds, many living and working out of their RVs and trucks.   You can find everything for sale here:   finished jewelry, strings of beads, polished cabs, chunks of rock and used lapidary equipment.
The dealers are set up in an open lot.   The weather was beautiful, and the open air venue was a nice change from being inside hotels and expo centers.   We had a great time looking at their items and talking to many of the dealers.  And, yes, I bought more cabs here.


Look for my finds to start showing up in my Etsy shop soon.  I’ve already made a few things.  In fact, I sold a pair of dragonfly earrings that I made as soon as I returned from Tucson.   They sold at the craft fair held in February.    The next craft fair for me will held on April 4 here in Surprise.   I hope to have some new items made from my Tucson treasures there.

Posted by Desert Dabbler at 12:25 PM No comments: 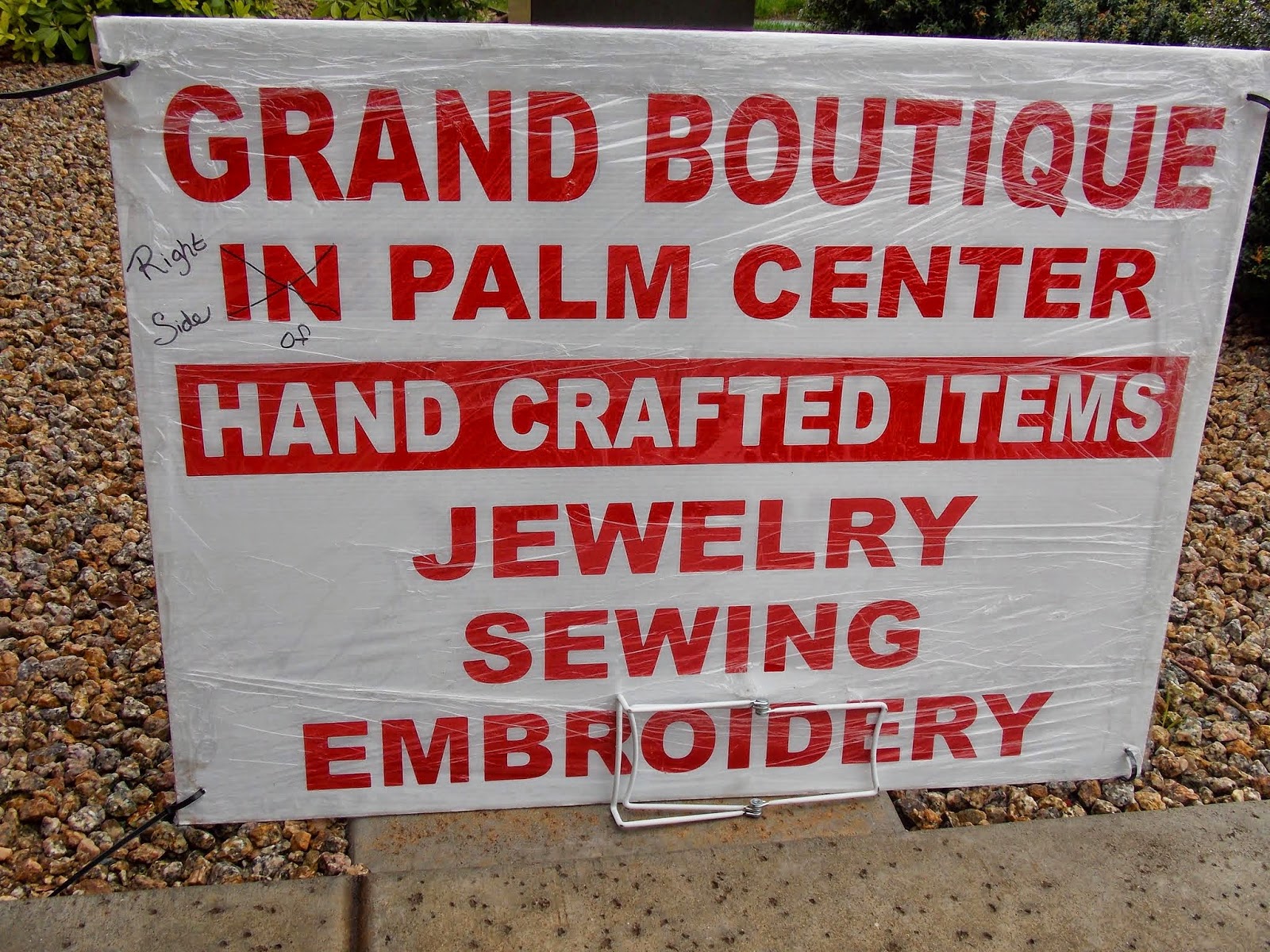 We had our first boutique of the new year last week.  Despite the unusually crummy weather and a ton of competing activities (it was Super Bowl weekend), we had a great time.
A few of us didn't make it into the picture, but here are most of us: 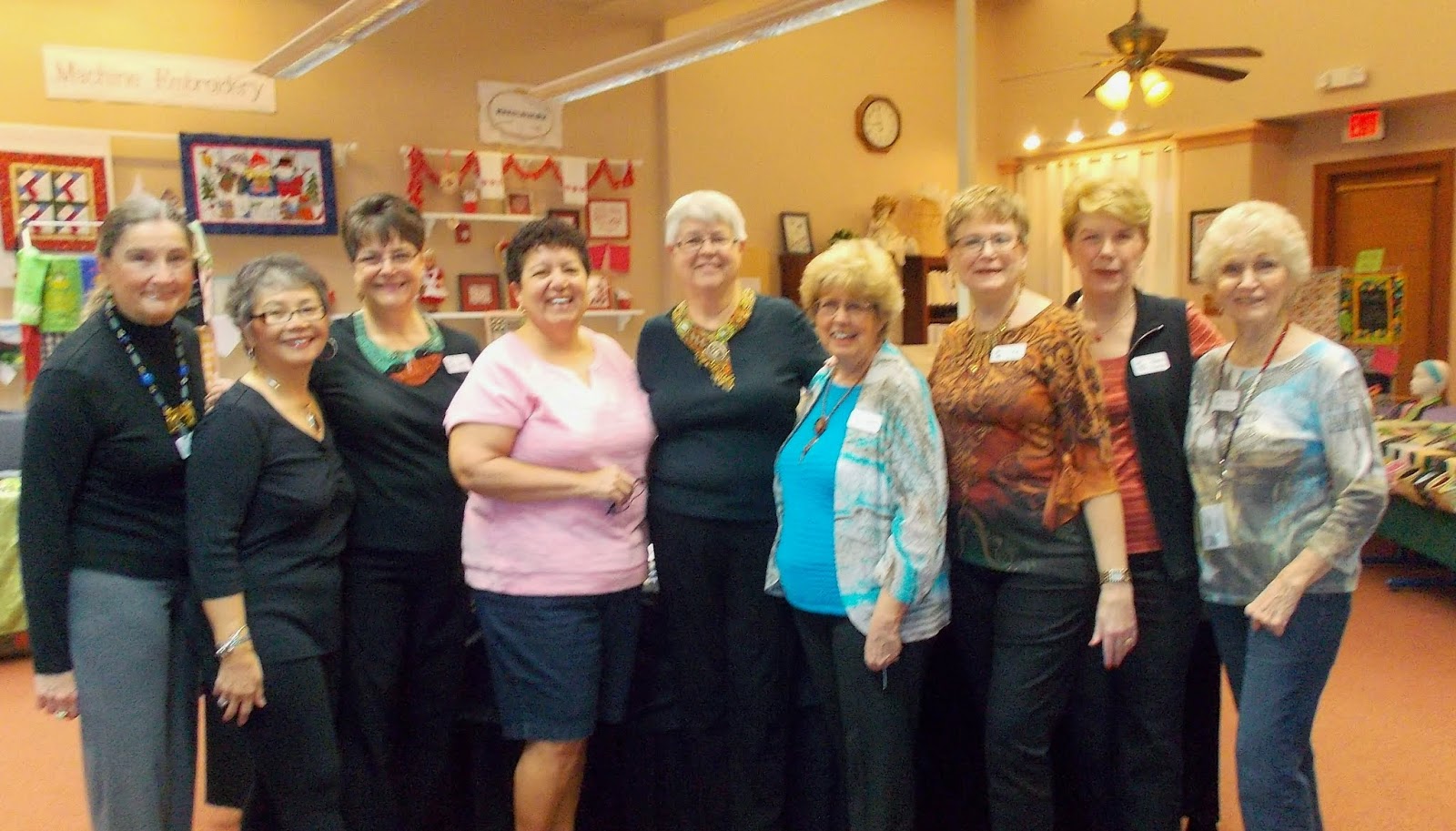 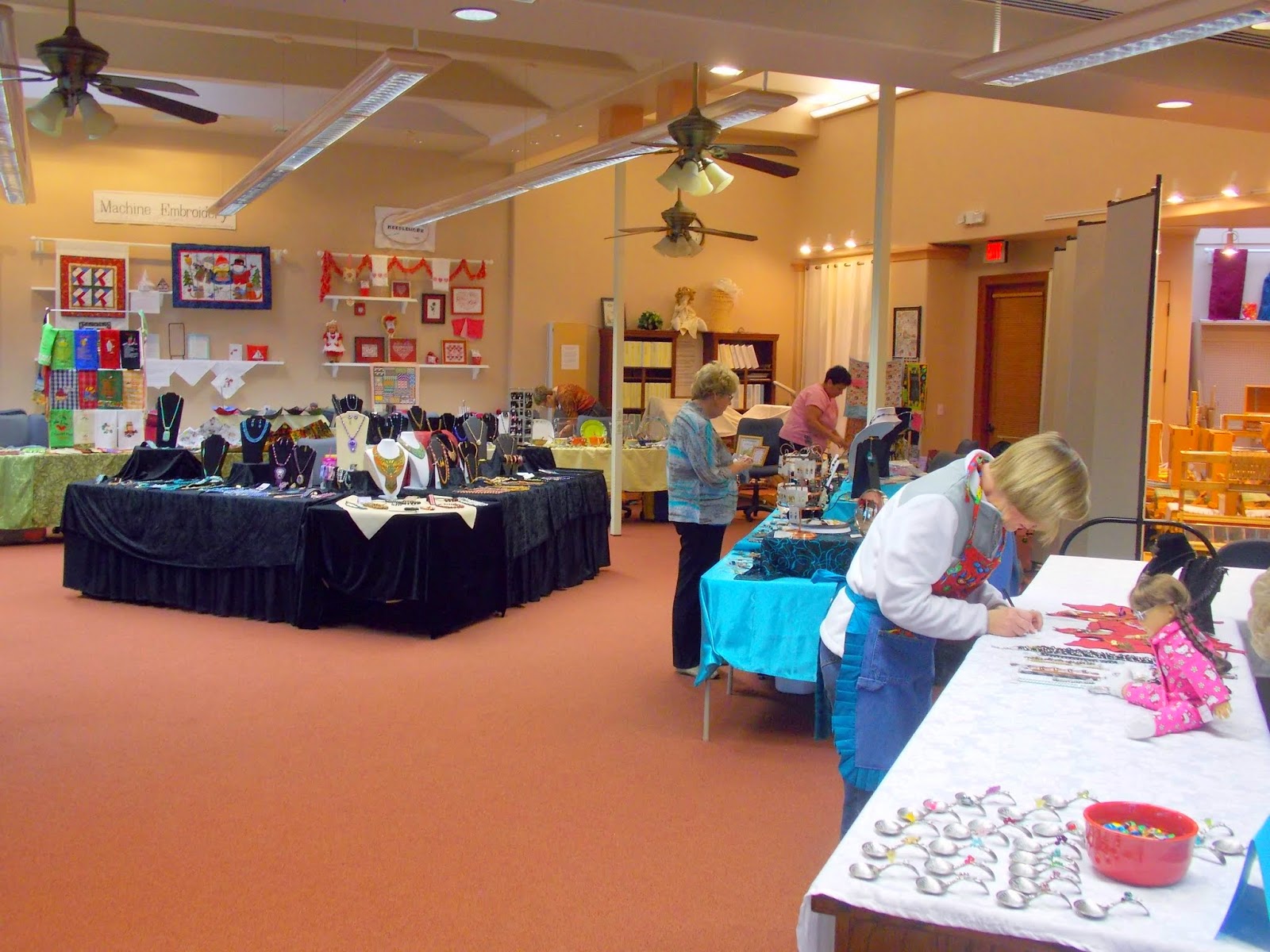 
Here we are with our shops: 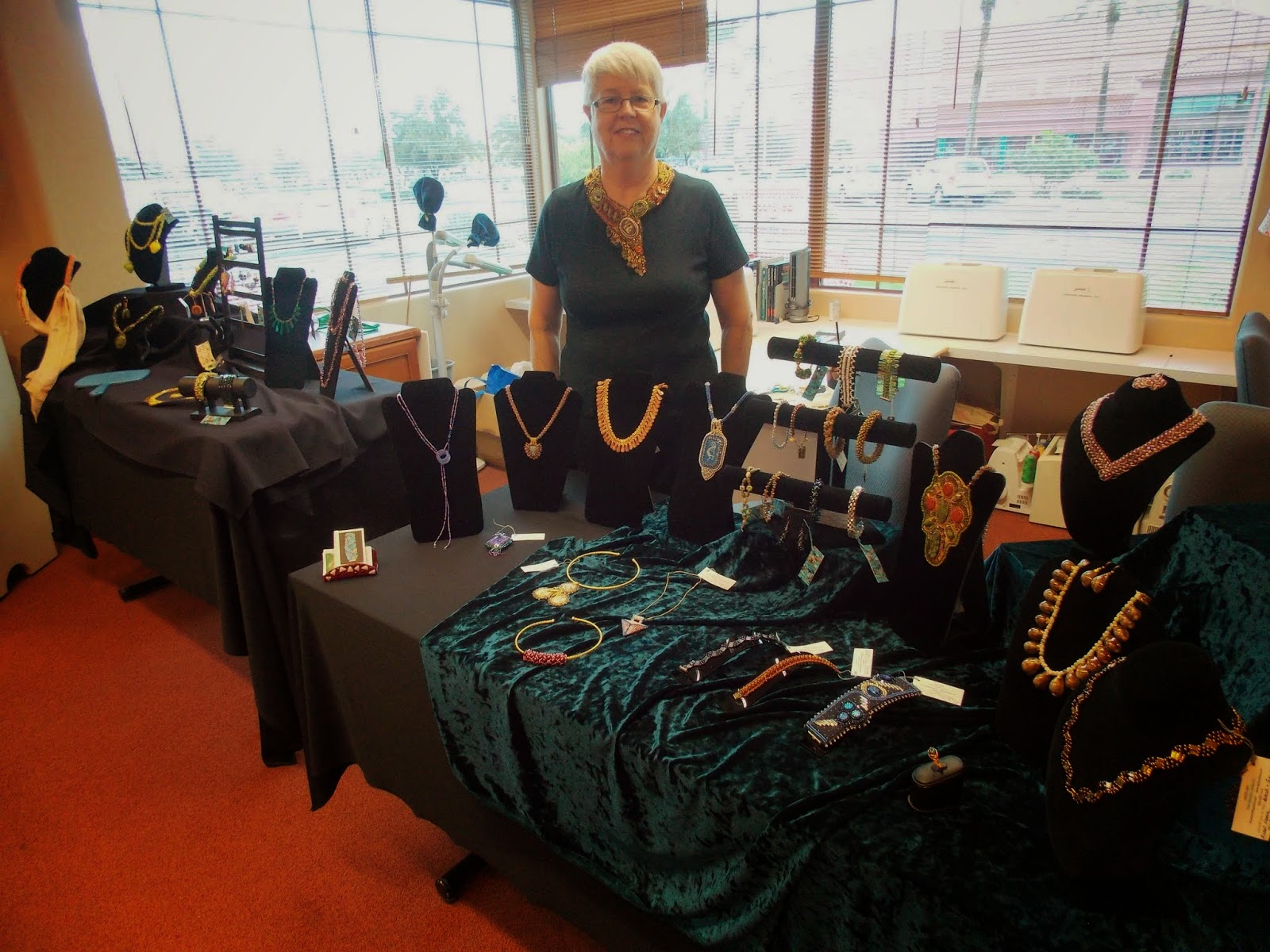 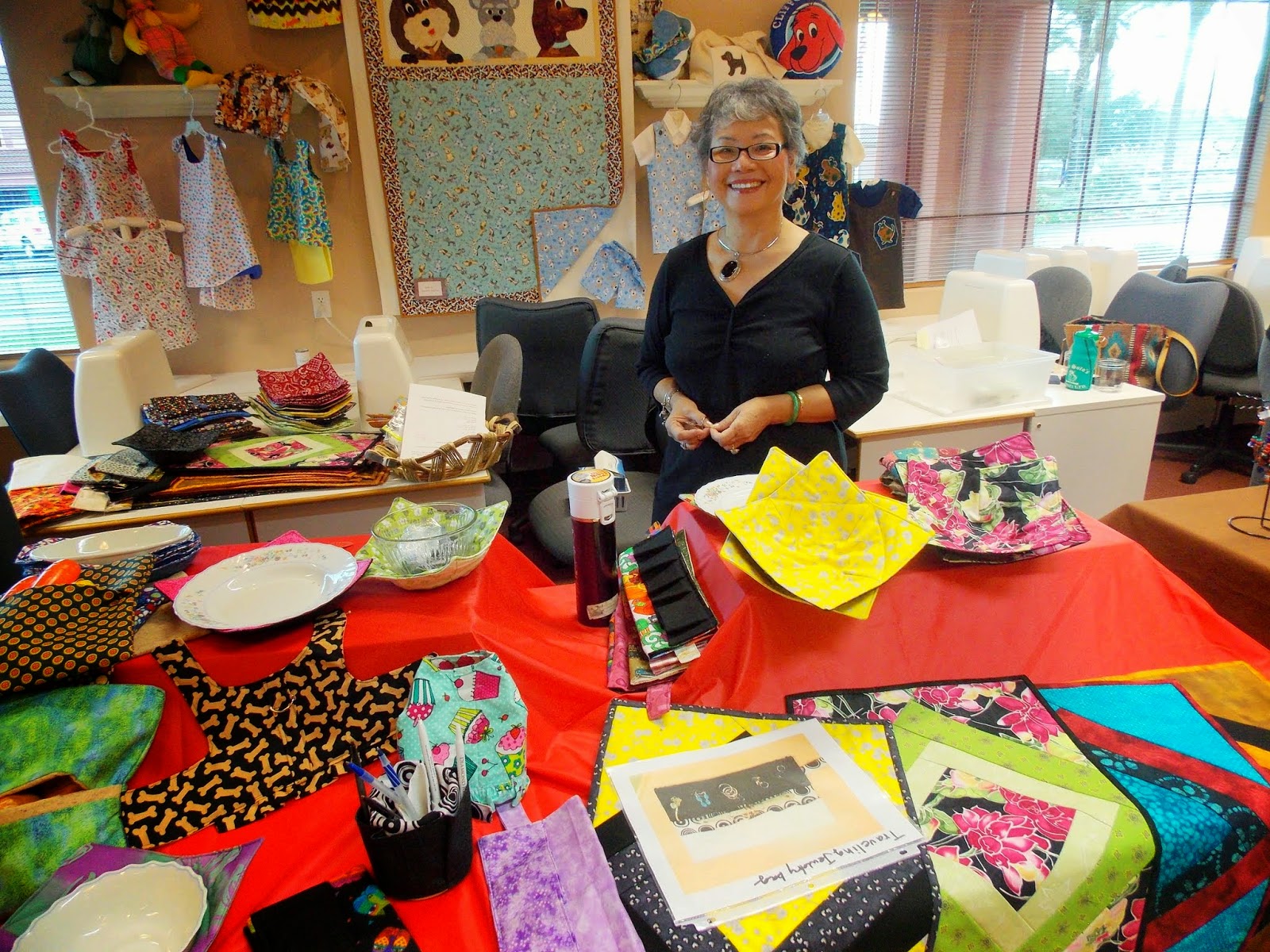 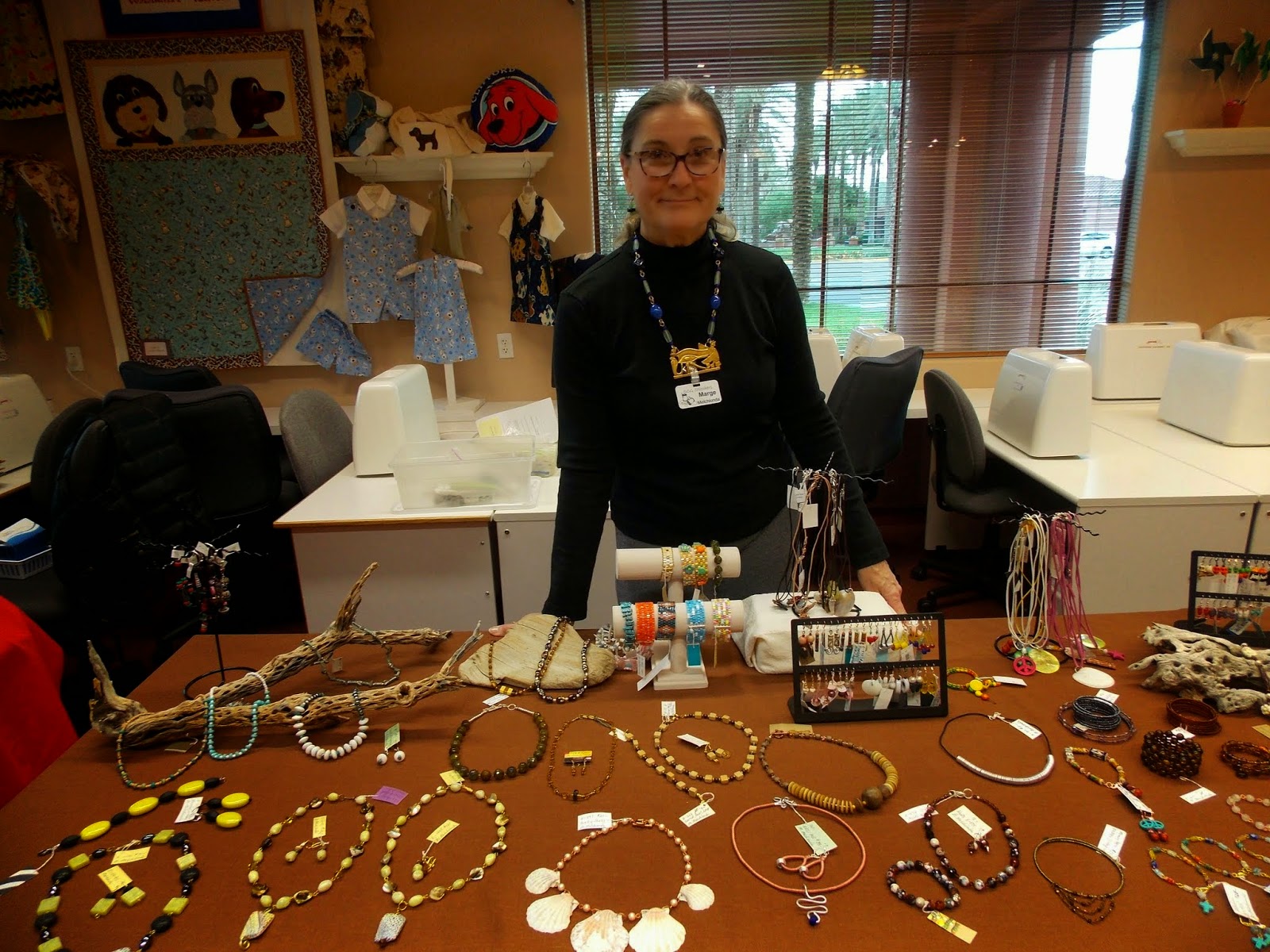 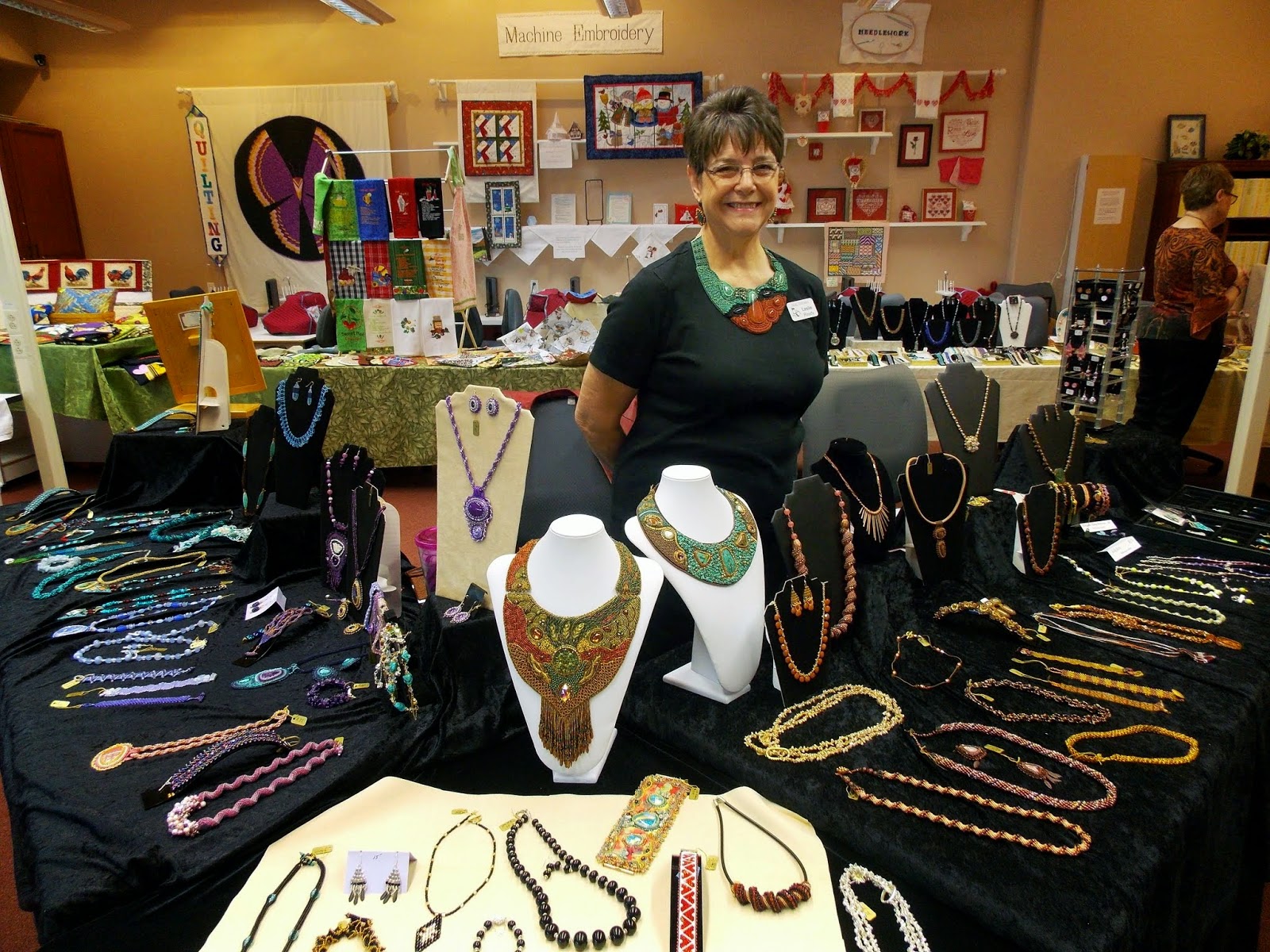 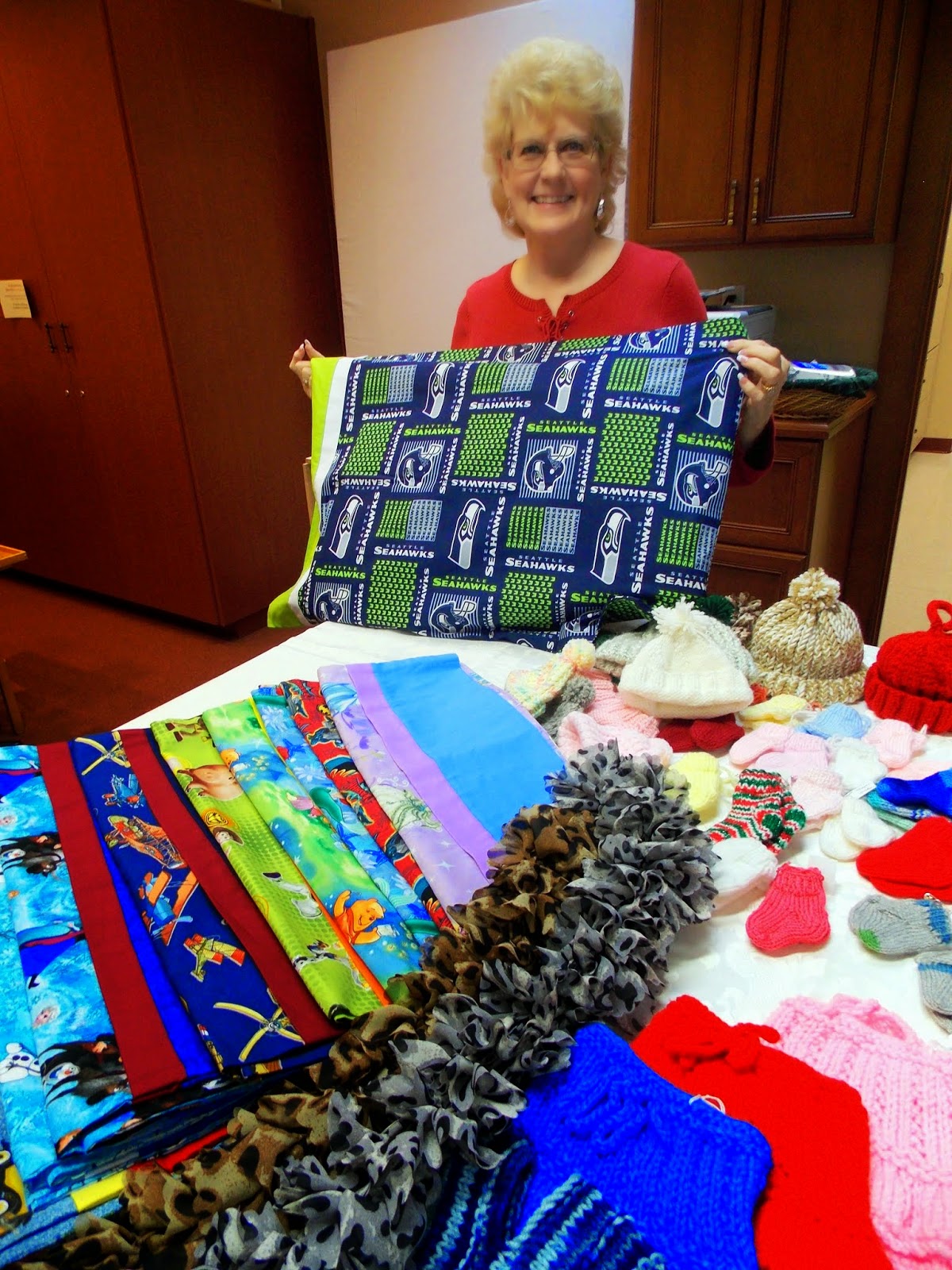 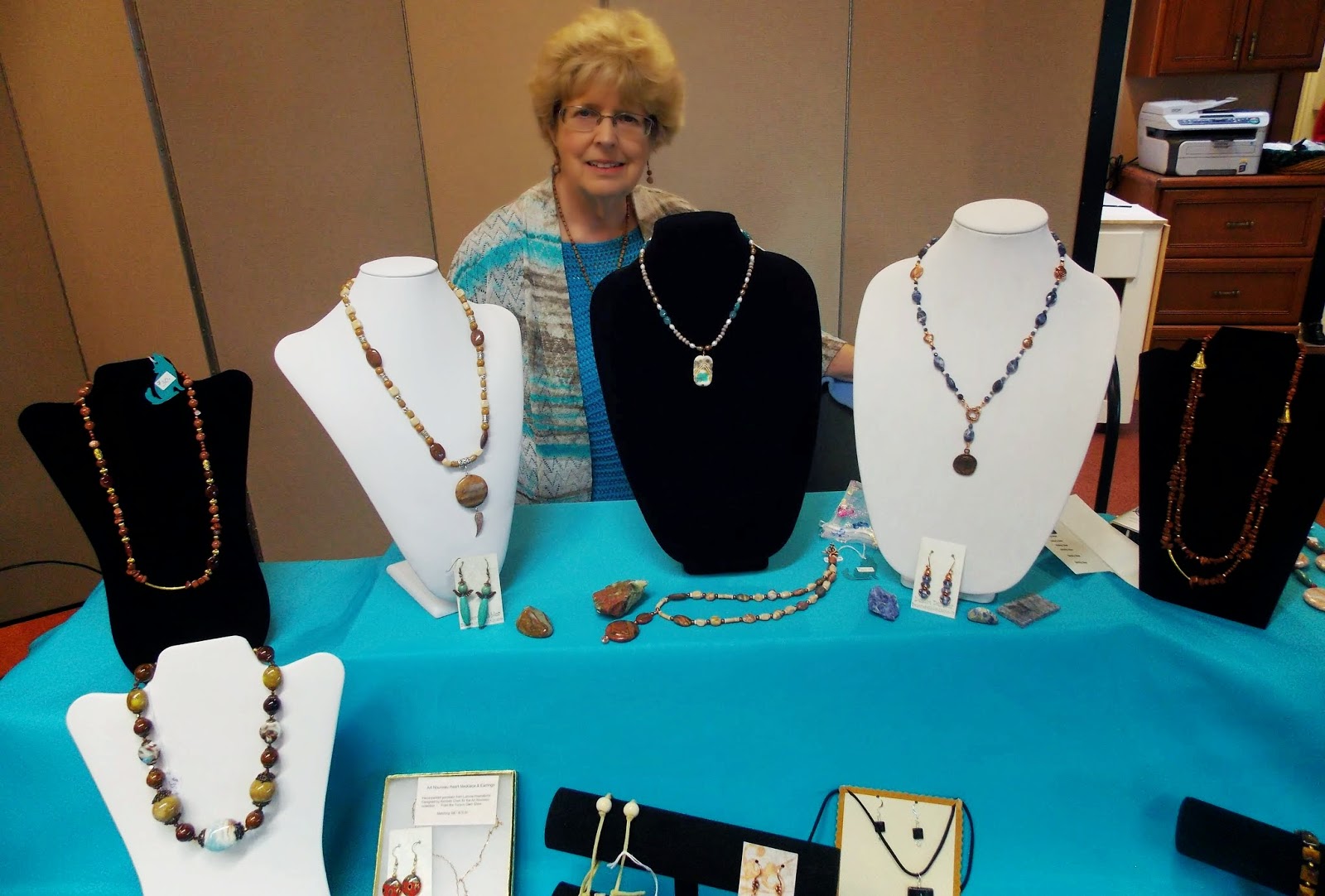 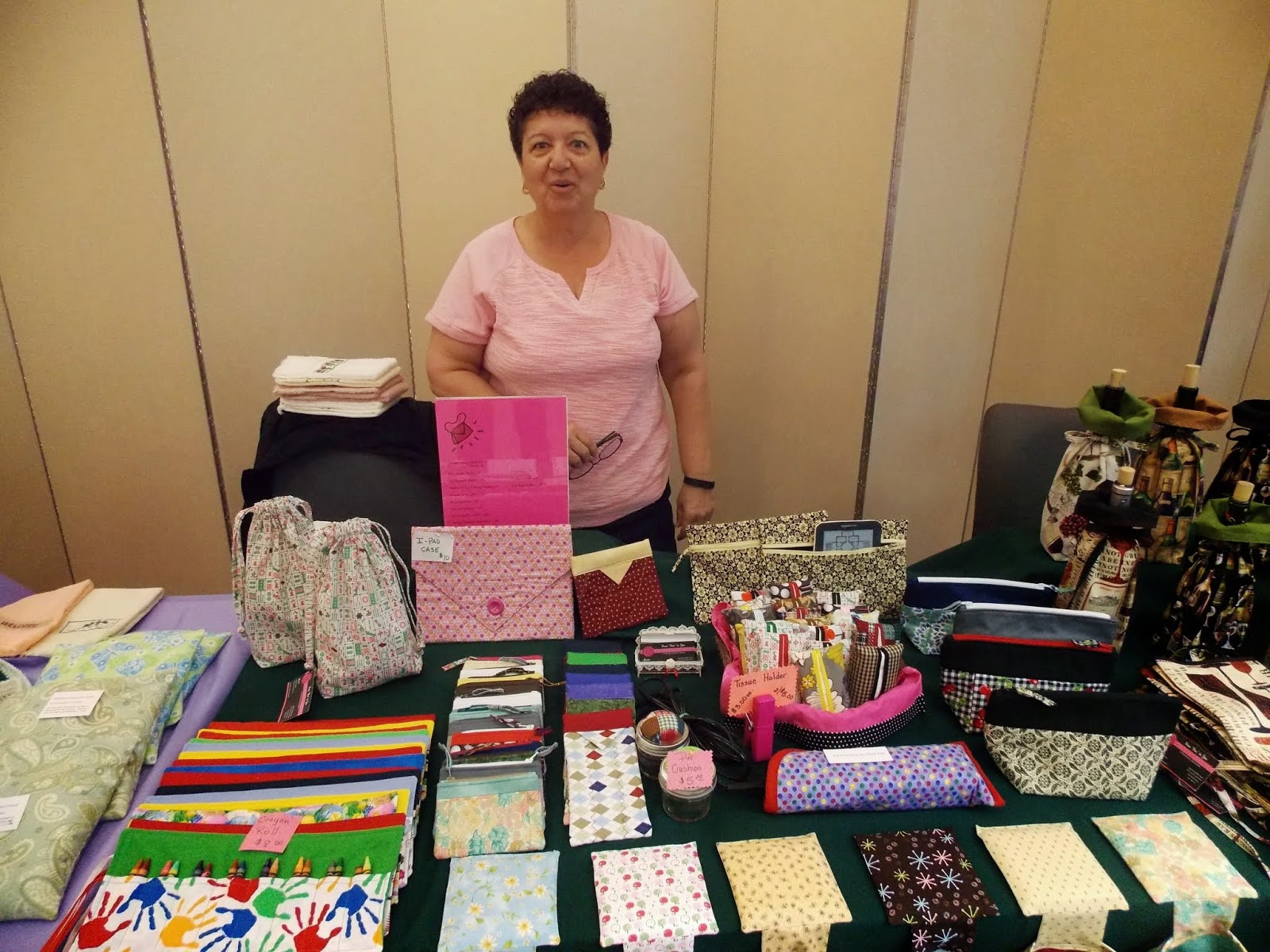 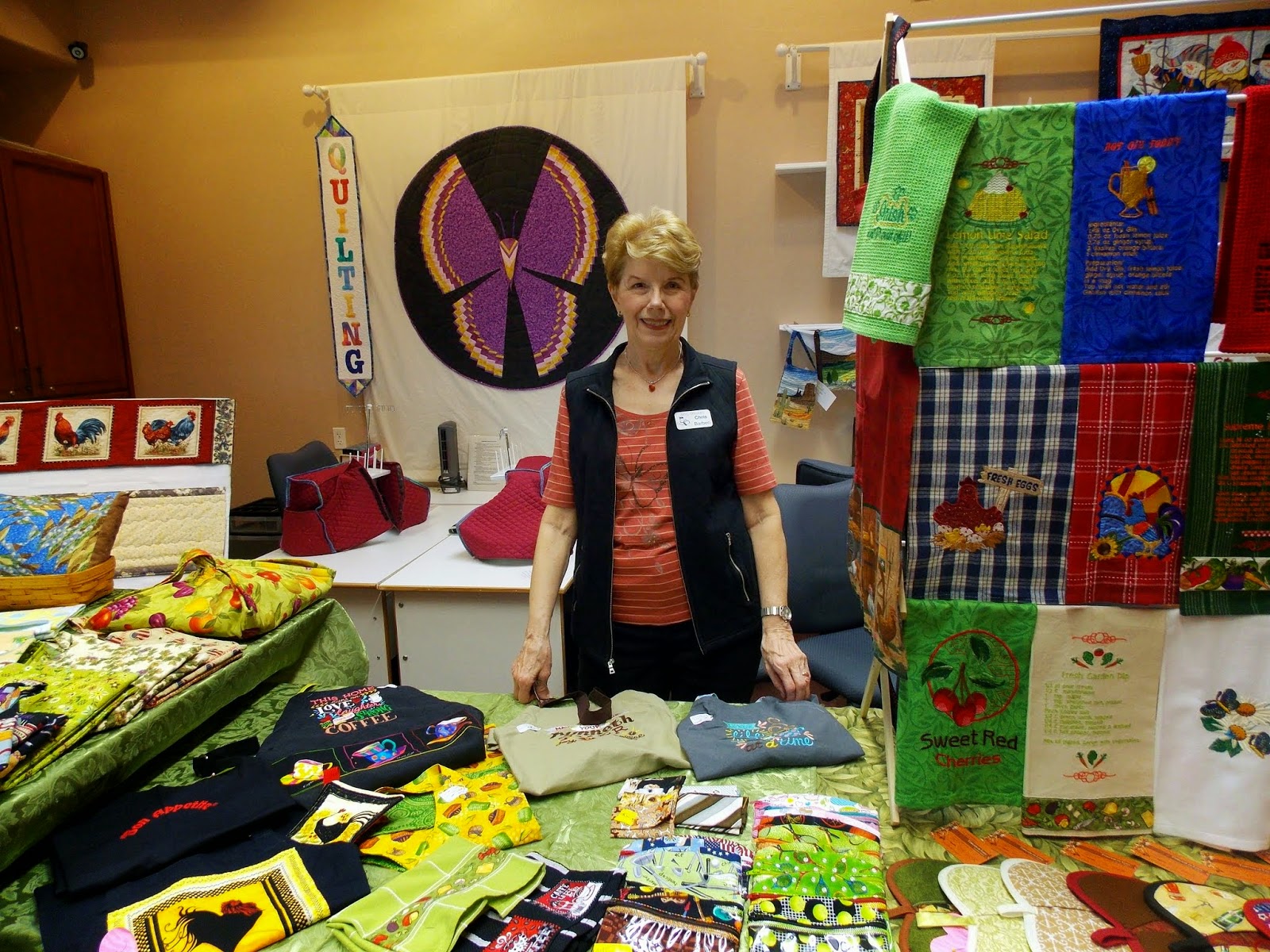 Our next boutique will be this coming Saturday, February 7, from 9 a.m. to 1 p.m.  We're located at the Palm Center, inside Sun City Grand on Remington Drive.    If you live in Surprise, AZ, stop by and shop with us!

Posted by Desert Dabbler at 7:11 AM No comments: