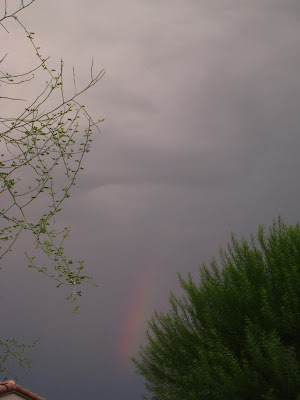 Before I moved to Arizona, I thought monsoons were something that only happened in India and exotic islands.   But here in Arizona, they have their own version of the Monsoon.

Officially we are in the middle of the season now, although it only just started raining here in Surprise a couple of weeks ago.   For a few weeks we could see the storms building but they never reached us.   Then last week we started getting some rain.   I took these photos on a day when we didn't get much rain, but we did get a beautiful rainbow.

Then Thursday the real thing hit.  I was on the road, driving home from Parker, when the storm hit here.  Luckily it had stopped raining hard by the time I got home.  I drove through a bit of rain near Wickenburg, but nothing dangerous.

On Friday morning I went walking with my friend shortly after dawn.   We saw a number of tree limbs broken and damaged and a few agaves uprooted.   Water filled the retention basin, too. 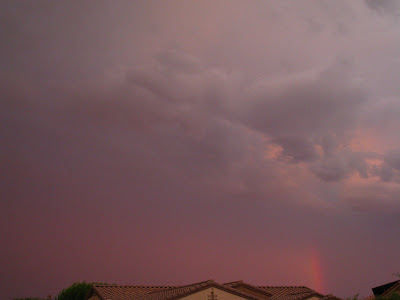 All weekend it has been raining, which is really unusual.  Much more common are fast, hard-hitting rains that don't last very long.   Instead of that, we have had a weekend of clouds and slow, soaking rains that are wonderful for the plants. 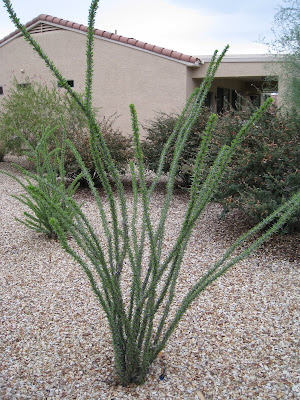 Our ocotillo loves the rain.
Posted by Desert Dabbler at 6:21 PM