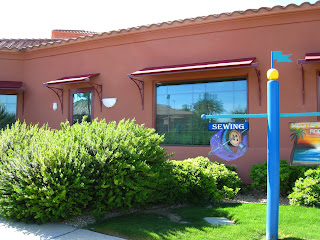 The Grand Stitchers (which includes the beading division) is located inside the original sales office for Sun City Grand.    When we were here originally,  picking out tile and cabinets and all of the other hundreds of things that go into a new house, this place produced major anxiety.    So many decisions to make in such little time!    We had never built a house before.   We had no idea how much we had to decide.   We only come for a 3 day weekend-- we had to be back to work on Monday.   Somehow it all got done, but this building was not my favorite place back in 2003.
Funny how things can change.
The first group I joined when I retired, and the only one I attend regularly, is Grand Stitchers.    What a great group!   There's something going on there every day through the week.  Plus, for the past few months we've held a boutique on the second Saturday.
I didn't take part at first because I didn't have enough skill to make good jewelry.   But I've taken classes and practiced a lot.   Some of the other women have shops on Etsy or their websites.    (I even have a small Etsy shop now.)  A few others place their jewelry in gift shops in their home towns.
Since I joined in with the boutique group, I've learned a lot--but there's still so much more to learn.    Currently I'm trying to learn artistic wire wrapping.    I've signed up for a class at the end of this month.  It's an intermediate level class.  Somehow I missed the beginner's class.   Maybe they gave it before I joined.   Or maybe I was gone that week.
Anyway, for the past two weeks I've been practicing the basics in order to be able to keep up with the class.   Good thing copper wire isn't too expensive.  I've been turning a lot of it into scrap metal lately.
This coming Saturday will also be the last Boutique of the season.    The snowbirds are leaving.   Already there's a noticeable decline in the number of people around.    This is the first summer that I won't be working, and it will seem quiet and empty when the snowbirds are gone.
So I'm hoping for a big day on Saturday to end the season in style.

Posted by Desert Dabbler at 5:29 PM