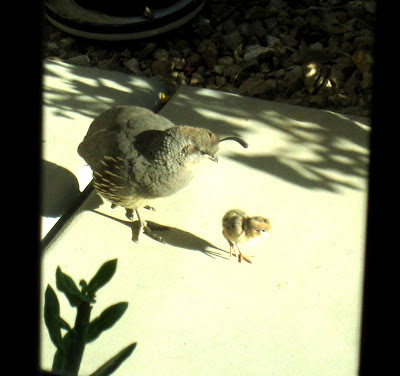 Earlier this year we had a nest of Gambel's Quail on our patio.    When the female quail first began laying her eggs, she would be all skittish and upset because we were frequently sitting nearby.    She would pace up and down, and both her and her mate would chatter.  He was especially loud and vocal about the intruders on "his" porch.   More than once we went inside so she would calm down and go on her nest.
Gradually she got used to us, I guess.   She would sneak into the patio quietly and get on her nest.   When she had laid about 10 or 11 eggs, she began coming in the late afternoon and staying all night.     We were always quiet and kept away from her, but she no longer seemed to mind us sitting there.
One day Kent saw that the eggs had hatched.   Only half of them, unfortunately, and neither the chicks nor the parents were around.    For days we didn't see them.  When we finally saw them, there was only one chick left.
Today she had the chick inside the courtyard while I was inside the casita.    I heard her outside and grabbed my small Canon camera.    Because I didn't want to scare her away, I snapped the photos through the window. 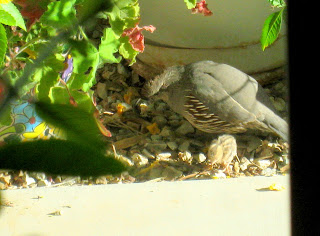 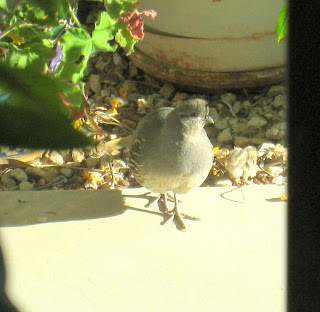 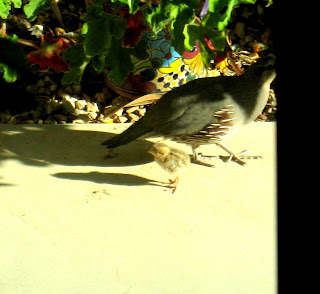 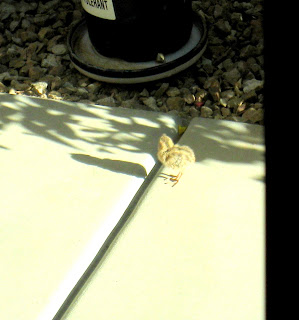 So there she is, a tiny fuzzy Gambel's Quail.
Posted by Desert Dabbler at 8:32 AM