K2 --The Awesome Stone from the Mountain 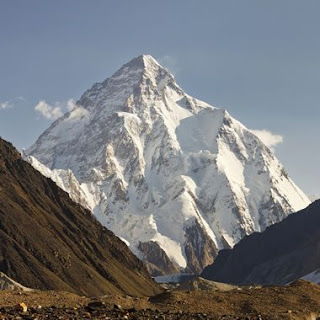 Many people know that K2 is the second highest mountain in the world, after Mount Everest.  Standing 28,251 feet above sea level, on the China-Pakistan border, it's an impressive and awesome mountain.


What is less known, but word is spreading quickly, is that an impressive and beautiful stone is being mined from the base of K2. Coming from the Skardu area of northern Pakistan, K2 is a grayish-white granite rock with bright blue splashes of color. One writer called it an "eye magnet" for anyone seeing it for the first time. It certainly was for me.

The first K-2 cab I saw, I bought.  I was at the Tucson Gem Show earlier this year and found it at one of the open air rock hound booths.  The couple only had a few pieces of it on display, and I bought the biggest one I could afford.  They had a pair of smaller matched cabs that would have made great earrings, but the combo was too pricey for me.  Besides, at that time I had never heard of K2.  I didn't want to spend a lot of money on stones I didn't know anything about. So I limited myself to this oval beauty until I could discover more.

What I found wasn't a lot.  It looks like the first cabs started showing up around 3 or 4 years ago, but not on any of the major beading sites that I buy from. It was chosen as the Rock of the Month in May, 2014 by Body Mind Spirit Guide.  It is currently featured at Dakota Stones. but this is the only major site that I can find carrying it.

The experts aren't in total agreement on what comprises the stone.  Most, if not all of them, agree it is granite. There are a few places that call it "jasper", but that appears to be incorrect.  The blue spots are probably azurite or malachite when they are green, which I haven't seen.  Most authorities call the spots "stains" rather than "inclusions" because you can see through the blue spots to the granite. But regardless of its scientific properties, all of the sites agree that K2 is unique and exciting.

I was able to find more K2 cabs in some shops on Etsy.  I bought my second cab there at SlabsCabsRough, a shop from Pennsylvania.  I've already started turning it into a pendent: 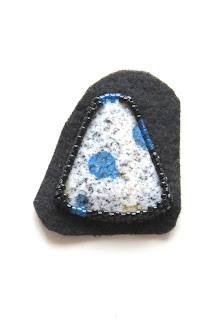 In addition to its beauty, many people believe that the stone has metaphysical properties.  Pat Krajovic wrote in Body Mind Spirit Guide, "It has many healing properties. If you want to promote harmony and connection within your work and family groups, communicate your deepest thoughts and feelings, and have more control over your emotions, this stone is a must! K2 helps the user become more grounded, balanced and live in harmony."

If you're into make jewelry, check out Etsy for some great buys on K2. If you like to leave the making to someone else, check back soon. I'll announce when I've completed the K2 necklace and listed it at Desert Dabbler on Etsy.