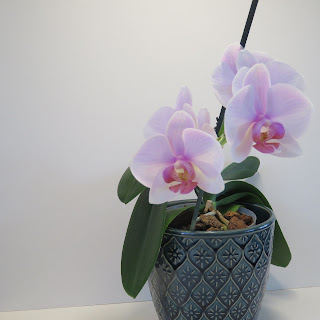 Last year my son gave me a beautiful Phalaenopsis orchid for Mother's Day.  It looked great for a few weeks, but then my "care" was killing it.  I was doing all the wrong things.  Watering it with an ice cube and failing to re-pot it were my two biggest mistakes.

Fortunately I found "Miss Orchid Girl" on YouTube and started following her instructions on how to care for orchids.  Her name is Dani, and she is amazing.

I bought an orchid pot and orchid medium from Amazon.  It's two bloom spikes were nearing the end of their life cycle. One had lost all of its blooms and the remaining ones were faded and limp.  I cut them off and removed the orchid from its original heavy soil.

After re-potting the orchid I stopped putting an ice cube a day on it and began to water it properly.  The leaves, which had shriveled up, began to fill out and look beautiful once again.  It took weeks and weeks for this to happen so I had to learn to be patient. 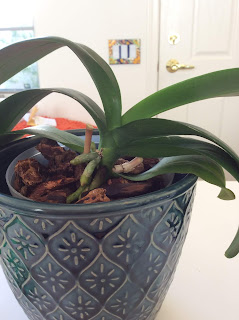 The orchid in September 2018.  New roots were appearing and the leaves were looking a lot better. 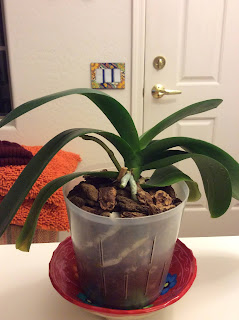 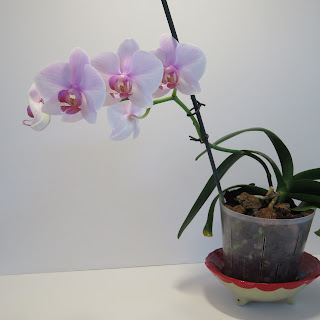 Most of the time my orchid sits on the edge of my art table. It gets light from windows on both sides of the room, but no direct sunlight.  I water it by soaking it for 20 minutes, then draining it thoroughly, about once a week.  Over the winder when it wasn't blooming it often went longer than a week between watering.  I watch the roots and don't water unless they have turned silver grey.   It's thriving now on this better care.

When it was new it arrived with 2 bloom stalks, but it only has one this year.  But I'm thrilled that it's alive and blooming at all.   It's all due to Dani's great videos and lessons on how to grow orchids.  If you want to know more about orchids, check out "Miss Orchid Girl" on YouTube. You'll soon be growing orchids like a pro.

Posted by Desert Dabbler at 7:12 AM