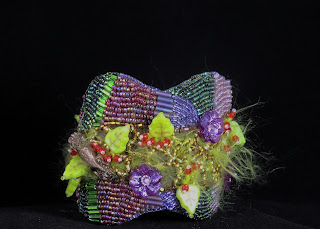 A group of my artist friends have been participating in a 10 day Art Challenge on Facebook.  The purpose is to promote positivity, passion, and attention to art.

I was nominated by Leslie Ready to show one image of my art, my life, my studio, or exhibition for 10 consecutive days. The rules were that no explanation was to be given.  You were also to nominate another Artist every day to do the same. So basically 10 days. 10 images, 10 nominations.

On the first day I posted a picture of the bracelet I entered in the Arizona State Fair a few years ago. It was the first (and so far only) time I have entered a juried contest.  I was accepted, but I didn't win any prize.  But my husband and I got to go to an Artist's Reception with my friend Leslie and her husband, both of whom had entered and won awards for their art. It was very exciting and a fun night. 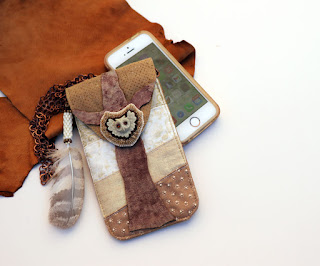 My entry for Day 2 was my Owl Cell Phone Purse. The feather came from a Great Horned Owl that had been living in another friend's tree and frequently dropped feathers on the ground.  I was taking a class on color, and the first assignment was to make something using neutral colors.  I had the little owl face in my stash and the feather, too.  I modified a Simplicity pattern to make the little purse. 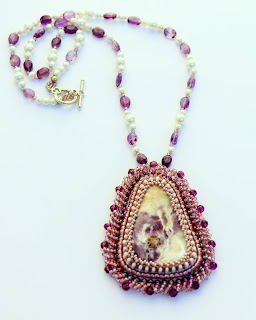 My choice for Day 3 was a necklace I made from a piece of Quartz with some Amethyst and possibly Citrine in it. My husband cut and polished it from a small slab we had found at a rock show.  I added Swarovski crystals and other beads to make the necklace.  One of my faves.
I tried hard to nominate other artist friends to participate, but I struck out. One person wanted to do it but was recovering from a serious illness that I had not known about. A couple of others had projects and activities going on and didn't think they could take time away from them.  Two people couldn't get Facebook to work for them.  After trying six or seven people, I gave up on that part of the challenge.  It's too bad. They are all good artists and it would have been great to see their work.
In a few days I'll post more of the Challenge pictures. In the meantime, if you've been in a similar challenge or would like to do so, let me know. I'd love to hear about it.

Posted by Desert Dabbler at 9:11 AM