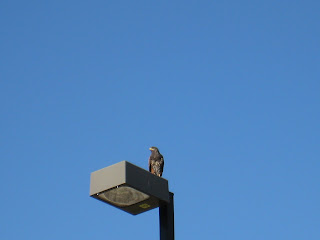 It is time to leave Yellowstone behind and get back to reality. The trip had only lasted a week, but I managed to write about it for a month. Plus I am now working on the Yellowstone scrapbook. Getting a lot of bang for those dollars. :)
But now that the hot summer is over, the snow birds and other wildlife are returning to Sun City Grand. It's time to put the vacation behind me and focus on the local fun.
The Harris Hawks are back. I have seen them flying and yesterday saw three of them perched on streetlights. They are always a treat to see. The photo above was taken last year. I hope to get an even better picture this year, but this one will have to do in the meantime.
Harris Hawks are sociable, unlike the Red-Tail Hawks that we saw in Ohio. You can usually see all three Harris Hawks together. When I was driving into Grand yesterday, they were perched on three light poles, all in a row, next to one of the golf courses. Guess it was lunch time. 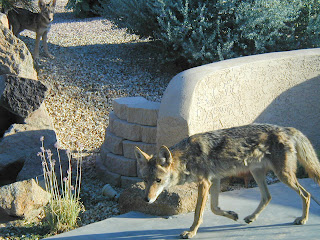 This photo is my favorite. This visiting coyote was on my back porch, and she had a pup with her, too. The pup is at the top of the photo, but hard to see. This was taken in 2006. Since then I have seen lots of coyotes, including one on my walk on Friday morning. But this is the only one of two that I saw on my porch, and the only one I was able to photograph. I keep hoping she'll come back. 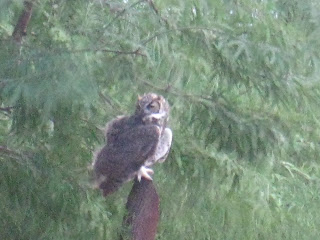 This Great Horned Owl was sitting in my neighbor's yard one summer evening in 2007. It had been extremely hot for days, but that night the wind began blowing. It was hot air, of course, but at least it was a great breeze. This fellow perched on the stump and spread his wings out, apparently to get cooled off. I was amazed! He stayed there for over an hour.
They stay in Grand all year, but I rarely see them. But we have been hearing them the last few weeks since we have been able to keep the windows open. One night the whoooo's were so loud that he (she) must have been in my neighbor's tree.
A couple of nights ago, Kent and I were walking at dusk. One of them flew about 10 to 15 feet in front of us. He was totally silent. No swooshing or flapping of wings at all. Just a whisper of air as he glided by. A few minutes later, when we were on the walking trail, we saw him again. This time he was perched on the high wall that separates Grand from Highway 303. A great hunting site.
Currently, the best SCG wildlife are bobcats. I have not yet seen one, but other people have. In fact, one of Kent's friends sent photos of a bobcat and two kittens that were hanging out on his porch. How lucky is that! He doesn't live far from us, so I am keeping my eyes open. And buying cat food.
Posted by Desert Dabbler at 6:04 AM