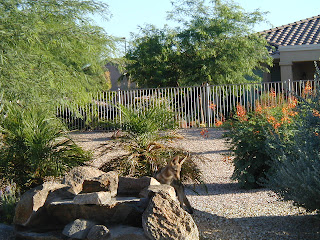 This coyote was behind our water feature a few years ago.
I always start off my weekend with an early morning walk with my friend Chris.  We are both early risers, which helps in the Arizona heat.   Our usual route is to go down a couple of  blocks and walk parallel to the golf course, cross the street and go down a long block to the walking trail.  Then we follow the trail to Mountain View, one of the main streets in Sun City Grand, until we reach a street that goes close to mine, turn and walk back to my house.   The entire route takes us about 45 minutes.

Today we had a special treat--Coyotes!!!   I love the little guys.   Chris spotted them first as they walked in the wash that runs next to the trail.   As soon as one of them spotted us, it ducked under a bush.   The other one ignored us and walked down through the middle of the wash like we weren´t there.   I concentrated so much on him that I lost sight of the other one.   By the time I tried to find him, it was too late.  He was hiding in plain sight among the bushes.

Later that night Kent and I went for a walk along the same trail.  We always wait for the heat of the day to leave, at least as much as it is going to do.  We take off around 7:30ish, while it is still light but fading fast.   By the time we reach the middle of the walking trail it is dark.

We were at that mid-point mark on the trail when Kent heard a noise behind us.  He turned to see a coyote cross the trail behind us and lay down in the shadows of a bush.   It was too dark to make out where he was exactly, but we knew he had not jumped the little wall that divides the trail from the houses.   We stopped and waited for a few mintues but he never moved from his shadow spot.    He was near the place where I had seen two coyotes earlier in the morning, and I wondered if he was one of them that had hung around all day.   Feasting, I´m sure, on a bunny or two.

The morning coyotes were in great shape.   They were the first ones I have seen here for a while.   I have been hearing them at night, but not seeing any.   So it was great to have a 3 coyote day.

What a great way to start the weekend.
Posted by Desert Dabbler at 11:11 PM