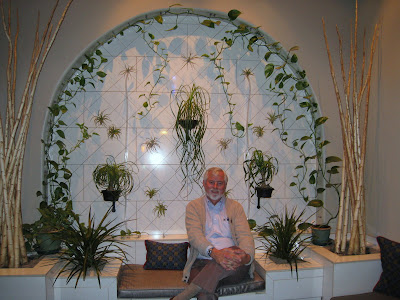 We celebrated Kent's birthday at the Cimarron Night Club last night.   I don't have a picture of it, or even of the Cimarron Center that is here in Sun City Grand.   But I had a great pix of Kent that I took during our trip to New Mexico earlier this month.   (Isn't that the way of it--lots of pictures of far away places and none of places close to home. )
So the above picture was taken at Andaluz Hotel in Albuquerque.   The hotel is beautiful, with a Spanish Moroccan decor. Around their main lobby are five or six "living rooms" where friends can meet for wine and cheese and quiet conversation.   Each one is different.  We picked the one with air plants.   Before we flew back home, Kent and I enjoyed a little wine and a great cheese plate here.
Andaluz also has a fantastic restaurant called Lucia.  After we found it, we kept returning.   We had two dinners and a breakfast there.   It was close to the hotel where I was attending a conference, and
Lucia's food was excellent.   I had Honey Glazed Muscovy duck the first night.  I love duck, but  I usually only get it once a year.   It's hard to find duck at the places we usually go to eat.   I was looking forward to having it for our anniversary, but the restaurant in Prescott was sold out of it.    So Lucia's Muscovy was my duck for 2010 and (probably) 2011.
At Lucia the duck is excellent.  They serve it with a pomegranate-blueberry sauce, which is perfect.   Not too sweet.   Kent ordered the Pan Roasted Salmon and said it was delicious, too.   The second dinner I had there was also an unexpected treat.   Colorado Bison Short Ribs.   I had seen Bison (buffalo) on the hoof and on the menu in Yellowstone, but I hadn't tried it.    Lucia's version is served with mashed potatoes.   Very tender and very yummy.
In comparison, Kent's birthday dinner was very sparse.   We only had time for a quick bite before going over to the Cimarron Center.    But the Night Club made up for it.   The cabaret/night club is a new item at Sun City Grand, and it seems to be a hit.   It's small--holds less than 80 people--and features a show once a month during the snow-bird months.
The January show just happened to fall on Kent's Birthday.  The entertainer was Mary Jo Johnson, who sang all our favorite songs.   She performed a wide range of easy-listening, lite jazz, and a little country that even Kent liked.  Her show is titled "Songs in the Key of Life," which is very appropriate.  She did songs made famous by Sinatra, Anne Murray, Patsy Cline, and many, many others.  Her rendition of Luther Vandross' "Dance With My Father" was especially touching.
Chris and Lou joined us, too, which made it extra special.   Wine, music, and friends made for a great birthday celebration.

Posted by Desert Dabbler at 7:02 AM