Today’s blog entry is a tribute to my mother, LaVaun Sloneker.  Today would have been her 97th birthday.   She was born in Hamilton, Ohio, on May 27, 1915.  This picture was taken of us at Christmas, 2010, at her assisted living center, The Inn at Renaissance Village, in Ohio. 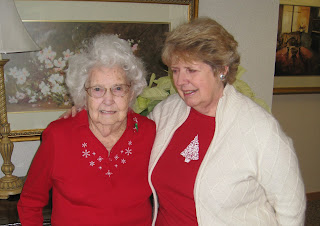 Mother was an excellent seamstress when she was younger.   Her love of sewing inspired me to write an article that was published in 1997 in the “Profiles from the Past” section of Over the Back Fence, a regional Ohio magazine.   They titled it "A Common Thread".   Mother loved it, but she always wanted me to write about what a great card player she was.   I never was able to do that, but here is part of the Profile article:


“While waiting for Mother in her doctor’s office, I perused the pages of a sewing magazine.  Its glossy pictures revived memories of Mother sitting at her sewing machine, making dresses for me and doll clothes for my Barbie.  I remembered the creative world that she and I shared when she was a young mother and I was a child.  It was a magical time when she wove sewing lessons into the lessons of life:  measure twice and do your best.
When we both grew older, that era faded.  My world expanded with decisions to make and responsibilities to bear as her world slowed down.  With fewer choices and less options, she didn’t have the opportunity to participate in my world; and I had not yet arrived in hers.  Looking at the magazine, I hoped it might bridge the distance between us—so I ordered a subscription immediately.
When the first copy arrived, I tucked it into my purse and drove to visit my mother.  I handed her the copy and watched her smile at the photographs of curly-haired little girls.  “When you were three, I made you a dress just like this one, except it was blue,” she said proudly.  By looking at the photos and chatting about the styles, we rekindled a common interest.
The next issue arrived, and I couldn’t wait to share it with her.  Together, we studied its pages and circled the patterns that promised to reduce hips and elongate torsos.  One day we hurried to the fabric store where we found bolts of colorful calicos, tweeds and knits.  We walked up and down the rows, feeling the fabric between our fingers and debating the virtues of virgin wools and cotton blends.
At the row of velvets, she told me about seeing “Gone With the Wind” when she was a young paper mill worker.  It was her first movie and she recalled her favorite part:  the scene where Tara’s green velvet drapes were made into a dress for Scarlet.  ...”


Until earlier this spring, Mother had been doing very well.  Her mobility was super.   Pushing her walker, she would zip up and down the halls at The Inn.   But her memory was failing, as was her hearing and eyesight.   Still, we joked that she could remember the important things: me, her family, and that she wanted to win a million dollars.   I told her that the fact that she couldn’t remember what she had for lunch (or if she even ate lunch) wasn’t important anyway.   She would reluctantly agree.  What did upset her was that she was no longer able to remember how to play cards.  She LOVED to play any type of card game.   Her memory for what cards had already been played rivaled any card shark in Vegas, too.
When she was young she had always been feisty and independent.   She went to work in a dime store before she was legally old enough by lying about her real birthdate.    Later she got a better job at Champion Paper Company.   During World War II, she temporarily left Champion to work in a propeller factory in Cincinnati because it paid better.  When she and the other women were fired so the men returning from the war could be rehired, she returned to Champion.    This was lucky for me:   Her new job was to give vitamins to the men working in the mill, and that is how she met my dad.
Unfortunately she caught the flu a few months ago, and it weakened her in body and spirit.   She had gradually been losing the ability to care for herself.   Now she was totally dependent on others, which she hated.   Mother always said she had lived a long and happy life.  She was ready, she said, for the next phase.    She went there on May 17, 2012.
I’m sure she’s reunited now with my dad, my sister, and all of her other relatives and friends.   I just hope she can find a card game going and a sewing machine there, too.

Posted by Desert Dabbler at 2:38 PM