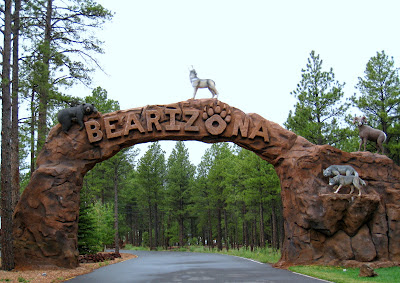 Yesterday we went to Bearizona, a wildlife park that you drive through.    It's the best wildlife park/zoo I've ever visited.     Bearizona is located outside of Williams, in northern Arizona.   I had seen a brochure about it a few months ago, and I've been wanting to visit ever since.


They have bears, mountain goats, buffalo, Dall sheep, and my favorite---wolves!!!
They have two kinds, Alaskan Tundra wolves (pictured below) and Artic wolves. 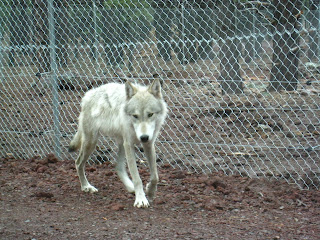 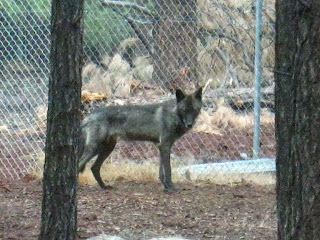 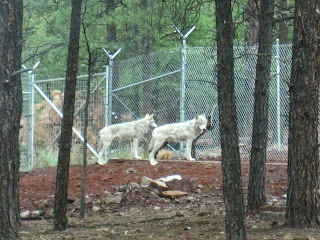 In Yellowstone a few years ago we saw Grey wolves, but only at a distance using scopes.   Of course it was great to see them in Lamar Valley, but I really wanted to see them up close.   At Bearizona I was able to do that because the white one, pictured first,  came right up to the car!   He was beautiful.
I was so occupied staring at him that I didn't try to take his picture.  He licked the Prius (lucky car), and circled around it to check it out.    We had to move slowly on because he and the other ones were getting a little too interested in the car.    They tell you to move on if the animals start to approach the car, but I just had to watch them up close for a little bit. 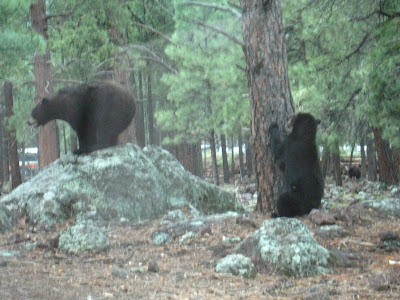 The bears were great, too.   I've never seen so many, active ones.   In the zoos they usually sit quiet, waiting for food.   But they were playful and energetic here.   It was cool and lightly raining, which may have helped energize them.
A few moments after this picture was taken, the one by the tree moved to a different tree and climbed it.  That was amazing to watch.   I knew they could climb, but I had never seen one do it.  Now I wonder how many times a bear might have been up in a tree while we were hiking unaware beneath it. 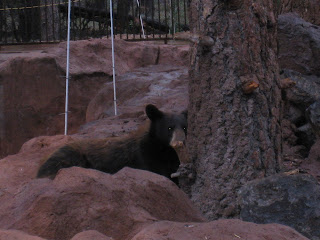 They easily blended into the rocks and hid behind trees, too. 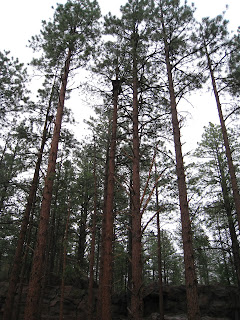 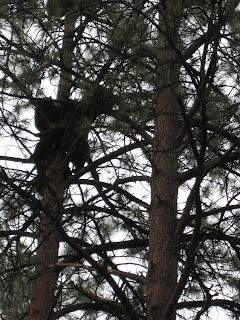 In  Fort Bearizona, the area where small and baby animals are kept, there were suppose to be bear cubs on display.   At first we thought they had been moved.  The enclosure was empty.   Then we looked up and saw that all of them (at least 5) were high in the tall pines.

We also saw porcupines, raccoons, beavers, Lynx, bobcats, fox, and many, many other animals in the Fort section.   This prickly little guy was enjoying his breakfast. 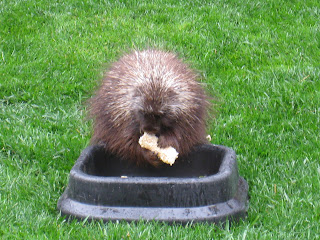 Bearizona has only been opened since 2010, and they are still working on it.   I can't wait to go back again.