Coyotes Along the Walking Trail 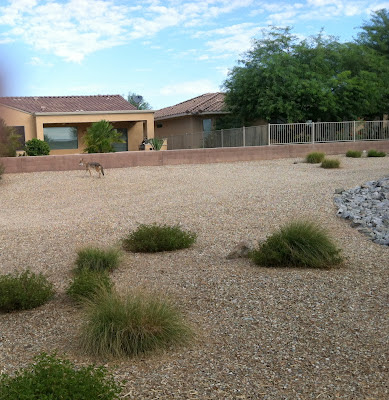 While I was walking this morning, I saw three coyotes along one of the walking trails at Sun City Grand.   When I saw the first one, I stopped and he did, too.   He was about 15 feet away.
He was beautiful!
He had walked up to the concrete and stopped.   Standing still, I talked quietly to him so I wouldn't scare him.   After a second or two he crossed the sidewalk and began walking in the wash area.  I didn't move except to pivot to watch him.
To my surprise, a second coyote walked up.  He had been following the first one, but I hadn't seen him.  He continued across the path without stopping.  He's the one pictured above.
I stood there wishing I had my camera--then remembered my I Phone has a camera.   By the time I fished it out of my pocket and got it working, they were getting pretty far away.
What you can't see is that there is a third coyote that entered the wash from the left side.   The three joined up and continued on their way.
I wish the video was better--I need more practice with the camera phone.
But it was great to see them this morning.

Posted by Desert Dabbler at 3:21 PM