Wulfenite, A Souvenir of the Red Cloud Mine Case 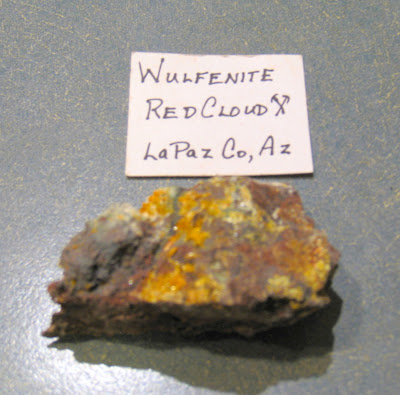 One of the cases that I left to my co-workers to finish when I retired from life as a public defender involved the Red Cloud Mine, located in La Paz County, Arizona.   I had intended to visit the mine since it was the scene of the crime, but it's in a very remote location.   Not only would it have taken all day to get there and back, I probably would have needed a 4-wheel drive vehicle.   I ran out of time before I retired and never made the trip.   Since I had never heard of the mine or the Wulfenite that is found there before the case,  I figured I would never hear about it again.
But yesterday, while we were at the Phoenix Gem and Mineral Show, I spotted two rocks from the Red Cloud Mine.   I bought one of them, which is in the picture along with the label that came with it.   Prior to this case I had never heard of Wulfenite.   But I liked the name, although it should have been spelled wOlfenite since I really like wolves.   However, it was named for the Austrian mineralogist, Franz Xavier von Wulfen, who discovered it in 1845.
According to an article by The Georgia Mineral Society, the Red Cloud mine produced silver and lead ore from the 1870s to 1890s.  Wulfenite crystals were a byproduct of the silver mining operation. The mine, which had been opened and closed many times since then as a specimen mine, closed during 2003.   It was bought a few years ago by a dentist from Kansas and is currently not open.
Jan C. Rasmussen of the Arizona Mining and Mineral Museum wrote and made available a PDF article titled "Wulfenite in Arizona".   It has beautiful pictures, diagrams, and a bibliography for anyone who wants more information.
Many of the large, high quality specimens of Wulfenite are selling for high prices.    My little rock was well under ten dollars.  For me, that was a great price for a souvenir of Arizona mining and one of my last criminal law cases.

Posted by Desert Dabbler at 6:27 AM