Aunt Virgie, my father's sister, was my favorite aunt.    She was fun to be around and, since she lived out of state, her yearly visits were always a special treat.
As the years rolled by, I grew up and the family changed.   My father, my grandfather, and my uncle all died.    When Aunt Virgie came to visit, she stayed with my mother. 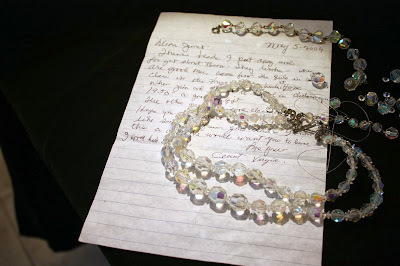 In 2004 Aunt Virgie gave me an envelope that had broken beads in it and a note.   She wrote that the crystal necklace and bracelet had been given to her in 1950 by her church friends when she and my uncle moved to Chattanooga so he could attend school.   They knew they weren't going to return to Ohio.  They later moved to New Orleans and made that city their home.   At some point the necklace broke, but she kept it because it reminded her of her friends.
I'm not sure why Aunt Virgie gave it to me.   I didn't make jewelry back then, and I didn't wear fancy crystals.   But, like my aunt, I kept the beads and the note because it reminded me of her.    When I moved to Arizona, I brought the broken jewelry and her note with me.

Last Friday I took a workshop on how to make a crystal pendant.   I wasn't very happy with the one I made in class, and I thought I would try again at home.   That's when I remembered Aunt Virgie's broken jewelry.    I found the envelope with the beads and the note.

I had to modify the pendant a bit in order to make it work with her crystals.    The workshop used 11/0 Delica seed beads in between the crystals and to form a bail.  But when I tried to use them, they were too small for Aunt Virgie's crystals.  The seed beads kept going inside the large crystals.  Their pretty effect was lost.
I tried Toho #6 gold beads, and they worked better.   Then I tired gold Czech glass, and I liked that look best of all. 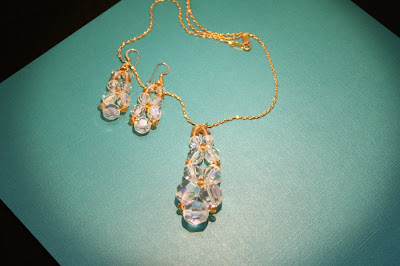 The workshop used all 6mm bicones, but Aunt Virgie's jewels were larger.  They were also in graduated sizes because they had come from one of the broken necklace strands.   I used larger ones on the bottom of the pendant and smaller ones near the top.  I used the smallest ones for the earrings.    I added gold filled ear wires and a gold chain that I had been saving.   The beads have a new look, but they are still Aunt Virgie's jewels.
Next week we're going to a music show entitled "Sentimental Journey".   I plan to wear my new/old jewelry there.   I think Aunt Virgie would approve.