The Druid Pack - Our First Wolf 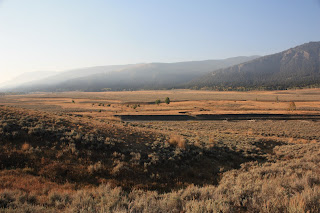 Look as far as you can in both directions, and you still won´t see where it begins or where it ends. 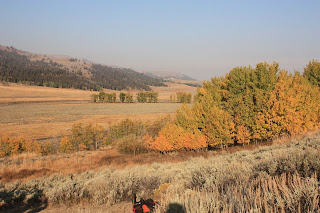 We left the cabins at Mammoth Hot 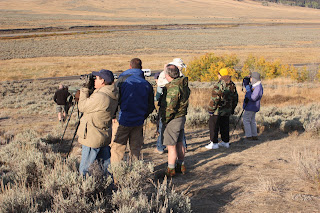 Springs before dawn to drive to

Lamar Valley.  We wanted to get there early, when the wolves are more likely to be active.

Climbing up a hill, we set up scopes, prepared cameras, and scanned the Valley.

All of us had seen Lamar in nature films, but only one of the group had been here before.  Linda and Nathan, of course, are experts at spotting wolves.  In that expanse of sage and grass, they know exactly where to look and what to look for. Trees line the back edge, and the road creates the front boundary. In between are sections of sage and grasses. A stream meanders through it, near the road.  I was amazed at its size, and I think many of the others were equally surprised.

A couple of men were fly fishing in the stream.  From our hillside, they looked like ants.  When I looked to the right, I saw Prong Horn Antelope grazing.  Bison were everywhere.

The Valley is home to the Druids, one of the oldest packs in the Park. On the first morning, we spotted a yearling pup, who was all alone. 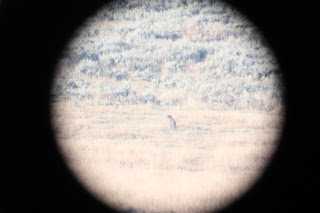 He was harder to see than I had expected.  Even when I knew where he was, the distances were too great for binoculars.  For me, the scopes were a challenge to use. I think they work better if you don´t have glasses with bifocals. I tried looking with glasses and without.  Mostly, I kept hoping the pup would simply come closer.

Still, I was seeing a wolf pup, and that was a thrill.

We watched him for hours as he played in the Valley.  He would move in and out of the sage, and occasionally howl.  Whenever he laid down, he disappeared in the sage.   We kept hoping the rest of the pack would arrive, but they never did.   Still, none of the other animals bothered him.   The antelope grazed in their area, and the bison roamed everywhere.

All that grazing made us hungry, too!   Nathan and Linda brought out hot coffee, huckleberry yogurt, rolls, cereal, hard-boiled eggs, and other breakfast goodies.  We feasted as we stood on the hill, surrounded by the animals, and watched the wolf pup.

Posted by Desert Dabbler at 5:16 PM