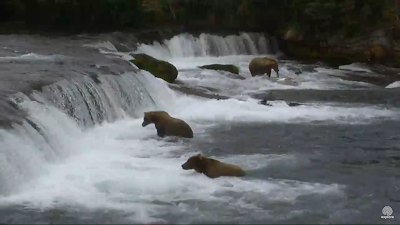 For the past few weeks I've been eating breakfast and lunch with the bears at Brooks Falls in Katmai National Park in Alaska.  The Park Service set up two web cams aimed at the falls and the river.  Though of us who can't make it to Alaska can see the live action, too.  Explore.org features the bears, as well as a lot of other animals, on its site.
Last night I had an extra treat when I came in to listen to Ranger Mike talk about the different bears.  It was an amazing night at the Falls.   The salmon were huge and plentiful.   The bears would position themselves and wait for a salmon to swim right by.  At one time I counted 13 bears.  The hour flew by! 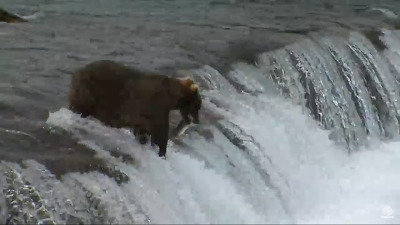 This female bear, #409, is a great fisher.  She caught a number of fish last night.   Another female, not shown in the picture, was standing nearby waiting for a chance to take the fish away or to at least get the leftovers.

The bears are all numbered, and some have been named by the people who watch and regularly chat on-line.   I tried to take good notes as Ranger Mike talked.  There's a free e-book available that has all their pictures and great info. 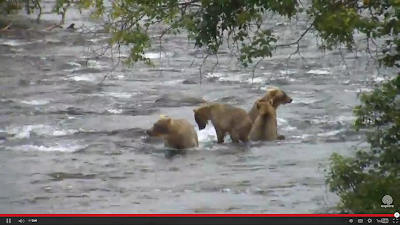 Holly and her two cubs were there, too.   The small one on the left is a female.  The middle cub is a male that she adopted.  I haven't learned the story about how that happened yet.  He's a year older than the female and doesn't like to share his food.    You can see his darker coloring in this picture. 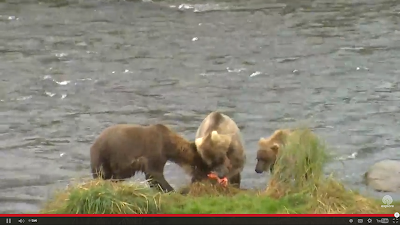 These two keep their mom busy all the time.   But she seems like a really good and patient mother.   They fish in an area called the Ripples, away from the bigger males. 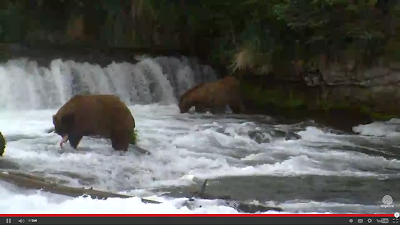 A big male with his catch. 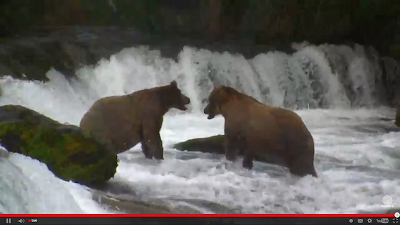 Two large males engaged in "jaw popping" as they sorted out who was going to be the dominate male.   It didn't last long before one of them backed away.  I was glad to see that. The fishing was good and a fight could seriously hurt both of them.   One of the bears lost an ear in June during a fight. 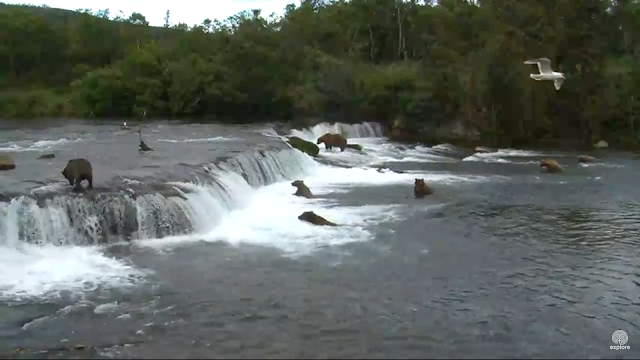 This photo was taken about 9 p.m. Alaska time.  The bears were still fishing and eating when I went to bed.
Posted by Desert Dabbler at 7:01 AM