Standing on the Corner


Standing on the Corner

Last week we visited Winslow, Arizona, made famous by the Eagles in “Take It Easy”.


My favorite site in Winslow was the historic and beautiful La Posada.  Designed by Mary Colter for the Fred Harvey Company, it served as a hotel and restaurant along one of the stops of the Santa Fe Railway.  It opened in 1930. 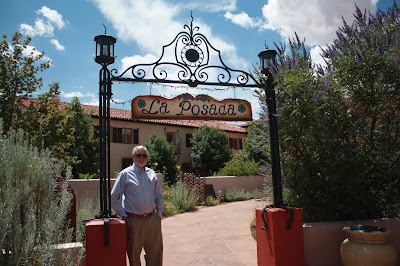 When it closed in 1957, it began to decline.   The beautiful furnishings were sold and the building was turned into offices for the railroad.  It continued to deteriorate until it was rescued in 1997 by Allan Affeldt and Tina Mion.    Along with a third partner, they have restored it and filled it with beauty and art.   They hope to continue its preservation through the Winslow Arts Trust.

We had lunch at their restaurant, The Turquoise Room.    I had their signature soup, a southwest mix of black beans, corn and chile cream. Delicious!

Posted by Desert Dabbler at 6:12 PM