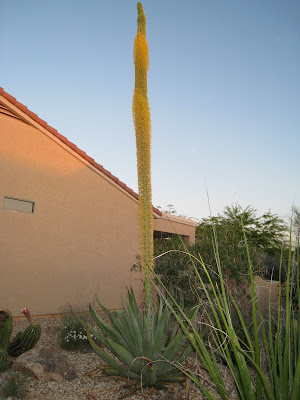 The Octopus Agave that we have had for about five years is in full bloom now. There seem to be a lot of them in bloom around Sun City Grand this year. I suspect it has more to do with the amount of water that we received earlier this year than to the age of the plant.
I´ve taken a lot of pictures of it. Soon it will be our only reminder of it and its beauty. Once the agave blooms, it dies. 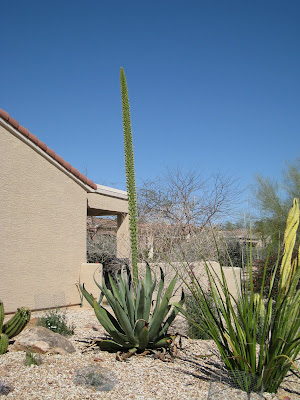 Some people here in Grand cut off the stalk, apparently in an attempt to save the plant. On a walk recently we saw one on that had been chopped off and left lying in the yard. A very sad sight.
I don´t think cutting off the stalk will do anything except keep the plant from dying a glorious death. The plant was made to grow in the desert until conditions are favorable for its offsping to survive. Usually that means when there is available water. The beautiful spike will shed little agaves, some of which will survive. 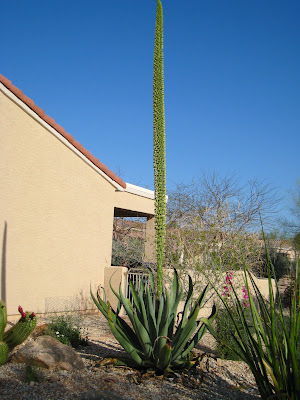 This photo was taken a few weeks ago, before the flowers opened. They began opening from the bottom and worked their way up. Here is a close-up taken at the same time. 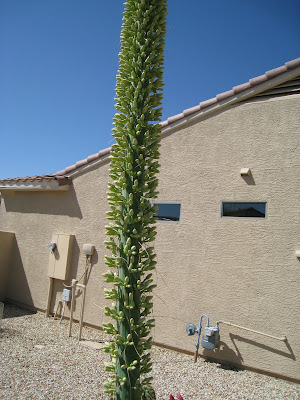 We nearly lost this agave a few years ago to weevils. Kent spent a lot of time battling them, and we weren´t sure if the plant would make it. Some of the damage can still be seen.
I´m glad it made it. It looks stunning in the center of the mound.
It was inevitable that it was going to die sometime. Now it has been able to go out in all of its glory, the way nature intended, and with the chance of leaving a little of itself behind.
A perfect way to depart this Earth.

Posted by Desert Dabbler at 6:24 AM