We took advantage of the extra day off that President's Day gave me to take a trip to Yuma and cross over the border into Algodones, Mexico. 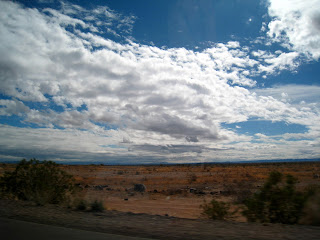 I work in Parker, Arizona, which is now in La Paz County.  But at one time it was part of Yuma County.  In the early 1980s they divided the county into two parts.   The northern part became La Paz.  So it was closer to leave from work on Friday than drive home and back-track down to Yuma the next day.
The drive was a fairly straight shot down Rt 95 through Quartzsite and into Yuma.   I was hoping to see some wildlife since a couple of wildlife refuges border the highway, but they were hiding.
We stayed at a Clarion that was clean and comfortable.   Close to lots of restaurants and only 10 miles from Algodones.   We planned to cross the border on Saturday morning, which we did, but earlier than expected.    We were rudely awakened by unexpected and very loud thunder early Saturday morning.    The usual sunshine that Yuma is known for was nowhere to be seen.   Rain was pouring and puddling around the motel.
By the time we got ready to leave the rain had slacked off, but it drizzled off and on past noon.   But it didn't stop us from having a fun time in Algodones.
The border is easy to cross going into Mexico.  Just drive up to the parking lot, park your car, and walk across.  The imaginary line that causes the politicians so much worry around here didn't bother any of us.  Coming back in took a lot longer due to computer problems, but we didn't know that was coming.
In Mexico, everyone was friendly and eager to sell you their items.  The rain kept a few of the street vendors away for a while, but they returned later.   It takes a bit to get used to the constant attention of people wanting you to look at their stuff, but everyone was polite about it.
We were on a mission to check out drug prices for when I retire and no longer have prescription coverage.   The prices were very low on some items, but still high on some specialty items.   But they were all definitely lower than what things cost here without insurance.    And I don't need a prescription for any of the drugs over there.   Very handy.   Lots of people were going to the dentists there due to the much lower cost.  Everyone seemed happy with the quality, too.
I priced new glasses, too, but decided to hold off on them for a while.
After checking out pharmacies and opticians, I was ready for some fun shopping.  We met a really nice man named Fix in Casa del Sol.  He makes decorative metal items, and I couldn't resist the lovely sun he made.
In addition to being a good artist, he was a really good sport.  He spoke Spanish with me, even though I am just learning and must have hurt his ears.      His sculpture now decorates our casita. 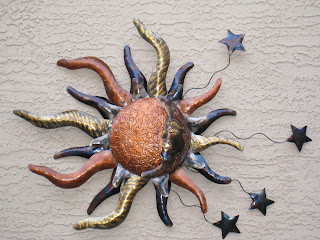 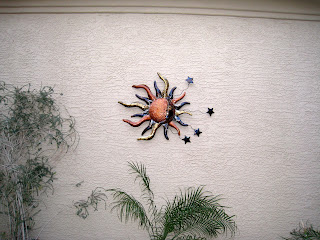 We had lunch in a small cafe that had really good food and even better atmosphere.   We would have eaten outside in the courtyard, but the rain had left all of the chairs too wet to use.   But we were treated to some unexpected entertainment inside when a young musician began playing and singing his guitar.   He was very good.
After lunch in Mexico, we returned to Yuma and toured the historic district.   I found a rubber stamp store, and Kent found a wine shop.  We were both happy campers and came home with some souvenirs.   Mine will last longer.
We had a great dinner at an Italian restaurant, Ciao Bella.  I had Seafood Fettuccine that was fantastic.   Kent tried their Eggplant Parmesan and said it was very good, too.   The decor was eclectic elegant, with candles, white table clothes, flowers, and a variety of small lamps that gave it a quaint, comfortable feel.
The next morning we went back to the Historic District.   We wanted to have breakfast at the Garden Cafe     They are known for their Swedish pancakes that are made healthy with oatmeal and served with ligonberries.   Kent said they were delicious.   I had a Southwest Quiche, which was cheesy and packed with fresh vegetables.
Next door to the Cafe is a museum that has a large display of birds.   We loved sitting outside on the patio watching the birds while we ate breakfast.   It was still chilly, but they turned on gas heaters that made it possible to enjoy the outdoors.
After breakfast we decided to head home since it was too chilly to do any walking around the town.   I wanted to see camels, too, which I thought were at Dateland, Arizona.    It turned out I was wrong, but we did find the famous Date Shakes.   Yummy!!!!
So after looking at this Post, I realize we pretty much ate our way through Yuma.   Not a bad way to spend a weekend.
Posted by Desert Dabbler at 6:02 PM