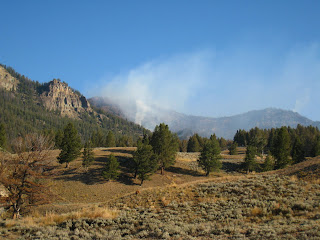 When we first arrived in Yellowstone, the Arnica Fire was mostly smoke.   This photo was taken from the Lamar Valley, looking toward the fire, on Friday.  Occasionally we could smell the smoke, but it appeared to be a very small fire.  ´

Studies have shown that small, controlled fires are needed for many of the ecosystems.  So the current trend is to keep it contained but allow it to burn itself out. 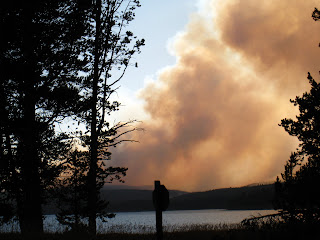 On Saturday, however, the winds picked up and the day grew hotter, which allowed the fire to grow.  The same weather conditions occurred on Sunday.  Roads had to be closed and more aggressive measures taken.
We were scheduled to go to West Yellowstone on Sunday and to Old Faithful, but we couldn´t get there with the road closures.   We ended up staying the night in Gardiner, but no one minded.   The hotel was very nice.  It overlooked a stream, and dinner was great.
The next day we were able to get to Lake Yellowstone, pictured above.   The fire was clearly visible from there.   As we got closer to the hotel, we could see the sprinklers wetting down the trees in an attempt to keep the hotel safe.   It was an eerie sight. 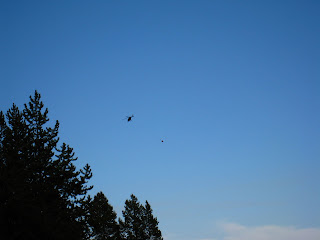 If you look closely, you can see the bucket hanging from the helicopter.   The firefighters were getting water from Lake Yellowstone to pour onto the fire.   The weather was forecasted to turn cold and snowy on Wednesday, which would end the fire.   In the meantime, the firefighters worked to contain it.

The fire burned approximately 9300 acres, or 14.5 square miles, according to the newspaper I bought.  Fortunately no one was injured, and the fire didn´t damage any structures.

The firemen said that if the rain and snow came on Wednesday, it would be a season-ending event.  That´s fireman-speak for ´´the fire will be out soon´´.    And it was.

Posted by Desert Dabbler at 9:07 PM