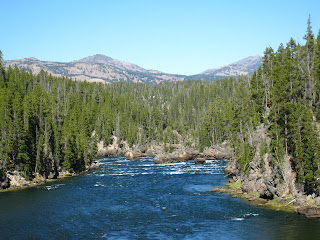 Last week we left the heat of the desert to travel to Yellowstone National Park. Our 40th Anniversary was in August, and we wanted to celebrate by visiting Yellowstone. We had gone to Glacier National Park ten years ago--our first trip West. Since that time we had been farther north into Canadian Parks, Banff and Jasper, but we had never been to Yellowstone.

We were on the hunt for wolves.  After years of hard work by scientists, political activists, and animal-lovers, they were returned to Yellowstone in 1995.   I had been one of the thousands of animal lovers who had written letters to politicians to try to save and return the wolves.  I had joined groups and seen and petted a captive wolf named Jethro.  Even made the family go on a wolf howl in Ohio. (No wolves, of course.  Just a tape player and dedicated, or crazy, wolf-lovers!)

Finally I was going to get to see wild wolves. 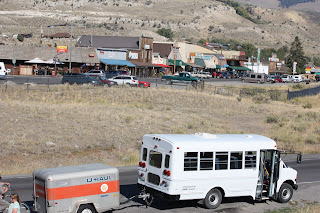 The Adventure Bus took us to Lamar Valley, Hayden Valley, and other great sites in the Park.  At night we stayed at a variety of neat places: cabins, Yellowstone Lodge, and Chico Hot Springs.

Our first night was spent in Mammoth Hot Springs.  The elk that live here are smart.  No wolves for miles.  The herd enjoys the safety of the lawn as well as the grass. They also keep the park rangers occupied with trying to keep the tourists a safe distance away. It´s fun to watch. 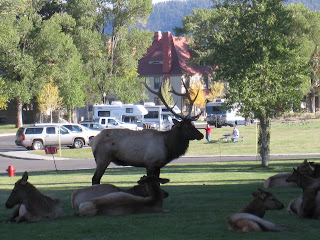 We spent the first day getting into the Park, watching the elk, and meeting each other. There were ten adventurers on the trip--from California, Boston, Pittsburg, Maryland, and Arizona (us).   One young couple came all the way from Oxford, England, making our trip an International Wolf and Elk Adventure!

A variety of occupations were represented, including retirees, paramedic, computer expert, business executive, soldier, nurse, and public defender (me). The thing we had in common was our love of wolves.  We were all excited about seeing them. 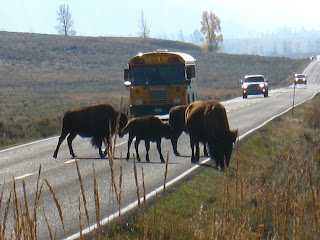 But first we had to get past the bison.

Even though I came to look for wolves, the bison were amazingly interesting. I had seen them before, but never so many and in their own environment. They own the Park, and they know it.  The wolves are the heart of Yellowstone, but the Bison rule.

But we were determined to see wolves, and soon we would. Early in the morning we were going to Lamar Valley...

Posted by Desert Dabbler at 4:55 PM