We hit the hill early on Sunday, looking for the Druid pup and hoping to see more of his pack today. Dan Stahler, another wolf expert, has joined us. You can´t have too many eyes looking for wildlife here.

The pup is there, and this time there is an adult babysitter with him.  It´s fun to watch the two of them interact.  The pup nuzzles the adult, playing and running around a little.   The pup is not well, however.  He has mange, and I can see the toll it has taken on his fur.  Dan explains about the disease and how it can keep the pup from growing thick enough fur to endure the severe Yellowstone winters.  If he doesn´t improve soon, he may not survive.  So it was good to see that one of the adult wolves was taking an interest in him.

While we waited for the other wolves to show up, we watched the other animals. They are the reason it is called America´s Serengeti. 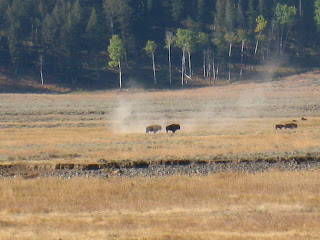 A buffalo just finished taking a dust bath in this photo.   They roam everywhere, and seem unaffected by the other animals.  They walked right through the area where the two wolves were at. They seem to know they aren´t in any danger.

A coyote came through, too, but he didn´t stay long.

Normally the elk would be here, but they haven´t come down from the high country yet.  The weather has been unusually warm.  The Equinox storm, which usually hits around September 22, is late.  You can´t tell it by the temps in the morning--it is very cold--but it warms up quickly.  By 11 a.m. we are all removing layers of coats and sweat shirts. 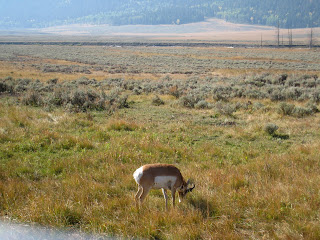 A small herd of Prong Horn antelope are here.  They are very pretty and frisky this morning.  Their rut will begin soon.

While we were watching for the wolf pack, a grizzly bear wandered down from the mountain that is on the other side of the valley.  He came very close to the buffalo, but no one could tell if he was really looking to hunt one of them or not.   At one point, however, a few of them lined up and faced him.  They stood shoulder-to-shoulder, and looked very formidable.   The griz ambled back into the pines after a while.

When the bear left, we decide to take a break, which means we hop into the Adventure bus and ride to the closest porta-potty.   It is at the other end of Lamar Valley.  While some of us stand in line, the others scan for wolves.   They soon spot 3 of the Druid pack trotting into the Valley and heading toward the other two wolves. Quickly we load back into the bus and return to the hill.   Eventually we are able to see another wolf through the scopes, but by now they are really far away.  The day is warming up rapidly, and the Druid pack appears to have left the Valley.
We decide to leave, too.  This time we are going to drive up to Mount Washburn, through the Dunraven Pass.   Bears have been spotted up there, and we decide to look for them.

Posted by Desert Dabbler at 6:13 PM