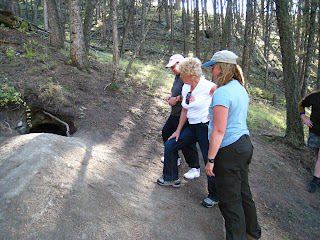 On Saturday afternoon, Linda Thurston takes us to an abandoned wolf den.   It is located about a mile off the road.    To reach it, we hike through a field dotted with buffalo ´´pattys´´, bleaching bones from former kills, and rocks.  Huge rocks, in some places.   Then we hike up the hill to the den.

Linda, a wolf expert, brings people to the den so that the wolves won´t attempt to use it again.  The other pack abandoned it when the wolf-watchers and road noise bothered them too much.  This points out how much wolves avoid people.  Even though the people stayed on the road, and the den is nearly a mile away, it was too close for the wolves. 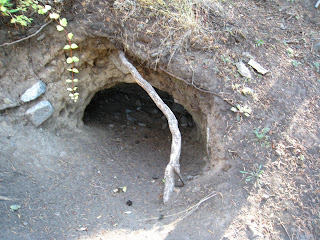 The tree roots help anchor it in place. 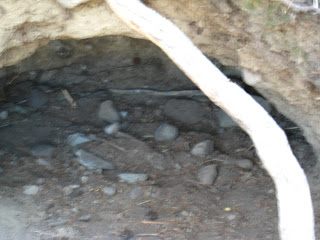 Chip, one of the guys in our group, climbed feet-first into the den.  The den is narrow, but deep.   He went nearly all the way in, with only his head and shoulders sticking out, and he could barely touch the back of the den. 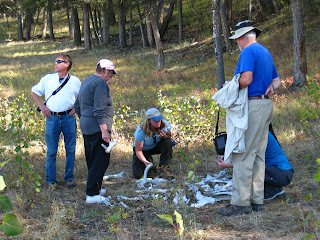 Linda explains the wolf/prey relationship using some of the old bones.

One theory is that wolves are always hunting, always checking on the condition of the other animals to see which ones may be weak, sick, or old.  One interesting side-effect of the reduction of the elk and deer population is the increase in some native plants.  It´s all about balance.

Another interesting stop that we made today was to the studio of Dan and Cindy Hartman.  They are wildlife photographers who live in Cooke City,  just outside of Yellowstone.  While we had a great lunch, Dan showed us slides and told about some of the adventures he has had photographing the animals.  Fantastic!
Check out his website to see some great pix of the wolves and other wildlife.

We had a chance to buy souvenir photographs, of course. (Yes, I had to have one of the Druid pack.) Dan is a lot of fun, and his studio is a great place to visit.

Tomorrow morning we are going back to Lamar Valley. One viewing is not enough! We hope to see the pup again, along with more of its pack.

We know there are great wolves out there, and we are determined to see them.

On Sunday, we are scheduled to go farther west and south, over to West Yellowstone and Old Faithful. A new event, however, may cause us to change plans. A fire that has been a small, non-event, has grown larger today. The weather has been unusually warm and the wind picked up this afternoon. The combination has allowed the fire to grow, causing the Park to close some roads. So Nathan and Linda will keep an eye on things. In the meantime, we are going back to the cabins tonight and have dinner at the Mammoth Lake Lodge.

Posted by Desert Dabbler at 3:37 PM